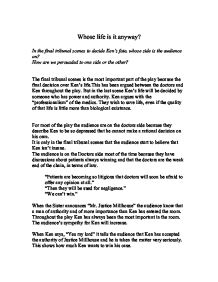 Whose life is it anyway?

Whose life is it anyway? In the final tribunal scenes to decide Ken's fate, whose side is the audience on? How are we persuaded to one side or the other? The final tribunal scenes is the most important part of the play because the final decision over Ken's life.This has been argued between the doctors and Ken throughout the play. But in the last scene Ken's life will be decided by someone who has power and authority. Ken argues with the "professionalism" of the medics. They wish to save life, even if the quality of that life is little more than biological existance. For most of the play the audience are on the doctors side because they describe Ken to be so depressed that he cannot make a rational decision on his own. It is only in the final tribunal scenes that the audience start to believe that Ken isn't insane. The audience is on the Doctors side most of the time because they have discussions about patients always winning and that the doctors are the weak end of the chain, in terms of law. ...read more.

Dr. Emerson describes Ken's suspected mental trauma as "common" in patients with ken's situation. He also describes it to be "impossible" for an accident like this not to affect the mind. The audience will take the sides of the Doctors and staff unless they recall back to the beginning of the play when Ken was first admitted to the hospital when Ken was finding it hard to take in his situation. He dealt with this by joking about his condition, which would have been the point where the accident had of affected his mind. But towards the end of the play Ken had realized his condition and stopped his witty comments about his condition and made his decision of not wanting to live. He had tried to accept his disability and failed which led to his decision. "Still, you must be in charge of the compost heap. That's where I should be." The audience would be please that Ken has another Doctor that has worked with mental patients to be fighting for Ken that is able to speak the oppositions language. ...read more.

Unless the audience would think that Ken is trying to disguise his depression by his wit and intelligence. "I seem to remember something in the papers - " After both parties have given their points I think the audience are on Ken's side, because anyone should have to the right to life, and it appears that Ken is not suffering from depression he just cant except his disability. When the judge gives his final summary and decision about Ken's case the audience just want to hear the verdict but instead the judge sums up the case with a few twists and turns before he gives his verdict. Ken doesn't allow Dr. Scott to kiss him because Ken thinks She is trying to get him to change his mind. He might think that Dr. Scott is using the last resort of "unprofessional" love to try and get him to change his mind. Ken might think that the kiss might make him change his mind because his has become very close with Dr. Scott during his time at the hospital but he doesn't want that friendly affection to turn into anything more because Ken realizes that it would not be possible to love someone in his situation. Danny Walker ...read more.