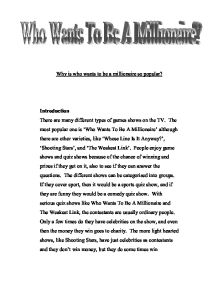 Why is who wants to be a millionaire so popular?

Why is who wants to be a millionaire so popular? Introduction There are many different types of games shows on the TV. The most popular one is 'Who Wants To Be A Millionaire' although there are other varieties, like 'Whose Line Is It Anyway?', 'Shooting Stars', and 'The Weakest Link'. People enjoy game shows and quiz shows because of the chance of winning and prizes if they get on it, also to see if they can answer the questions. The different shows can be categorised into groups. If they cover sport, then it would be a sports quiz show, and if they are funny they would be a comedy quiz show. With serious quiz shows like Who Wants To Be A Millionaire and The Weakest Link, the contestants are usually ordinary people. Only a few times do they have celebrities on the show, and even then the money they win goes to charity. The more light hearted shows, like Shooting Stars, have just celebrities as contestants and they don't win money, but they do some times win miscellaneous items and points. These shows are mainly for entertainment of the viewer rather than that of cash prizes or materialistic value. Who Wants To Be A Millionaire is different from other game shows because the prize money is so great, which adds viewer suspense. By comparison the weakest link, offers up to fifteen thousand pounds prize money, although usually the contestants only win about two and a half thousand pounds. ...read more.

and then to a steady rhythmic beat like a heart beat. That gives a little bit of suspense before Chris Tarrant tells them if they have got it right or not. The camera work in the show, in the beginning before any contestants start, the camera shows you the whole set including the audience, but, when it starts the camera is mostly on the contestants and Chris Tarrant. Occasionally, the camera shows the contestants' partner when the get to a milestone question or when the contestant is not one hundred percent sure of his answer. Who wants to be a millionaire's marketing is on many platforms, TV, radio, games and computer games. There are lots of ways for people to play the games and see if it is the same as on the TV. In conclusion, I think people watch Who Wants To Be A Millionaire because of the different aspects and techniques in the show. The cumulative effect of all the different aspects in the show make it interesting and not like other quiz shows. The audience at home have a chance of appearing on the show and have a chance to win a lot of money. The armchair quiz players have the ability to see how much money they would have won, if they had gone on the show. Who Wants To Be A Millionaire appeals to a wide rage of audience, because almost everyone can answer the questions at the beginning of the show, so the whole family can join in. ...read more.