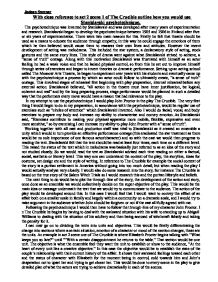 With close reference to act 2 scene 1 of The Crucible outline how you would use Stanislavski psychotechnique.

Jodean Sumner With close reference to act 2 scene 1 of The Crucible outline how you would use Stanislavski psychotechnique. The psychotechnique was invented by Stanislavski and was developed after many years of experimentation and research. Stanislavski began to develop the psychotechnique between 1905 and 1906 in Finland after five or six years of experimentation. There were two main reasons for this. Firstly he felt that theatre should be used as a means to educate the audience through empathy, in this way he could engage the emotions of them which he then believed would cause them to reassess their own lives and attitudes. However the recent development of acting was melodrama. This included the star system, a declamatory style of acting, stock gestures and the same story lines. This style of drama went against what Stanislavski strived to achieve, a "sense of truth" onstage. Along with this motivation Stanislavski was frustrated with himself as an actor feeling he had a weak voice and that he lacked physical control, so from this he set out to improve himself through series of exercises and began to invent theories on dramatic performance. ...read more.

The action of the play would be developed around this. In this case I would feel that I would want to convey the effect of an affair both on a smaller scale in family and largely within a community on a dramatic scale, and I would try to raise argument in the audience whether John should be forgiven or not if the cast all fully agreed with me. Following the psychotechnique I would then have to follow the through-line of my character John Proctor. I n The Crucible he begins by having to deal with the awkward situation with his wife to standing up to Abigail Williams to dealing with the situation of his adultery and then being accused of witchcraft falsely and taking the penalty for it. I can now go on to dividing the texts into units and objectives. This would be firstly differentiating the change into sections where a certain situation, emotion of a character or mood of the section changes, these are the units. An example in act 2 scene one of The Crucible is where Elizabeth Procter begins talking with "What keeps you so late?" until ""With a certain disappointment he returns to the table." That section would be one unit. ...read more.

The tempo may not reflect in the movement of the character but if felt by an actor can help to convey effectively the emotion of the character. In my case the first unit of the first scene of act 2 the internal tempo rhythm of John's character would be just a bit higher than his resting tempo rhythm because there is tension between him and Elizabeth and he is trying not to upset her. Once this has been planned out I will have completed the internal rehearsal process. I will know how to perform my character and have a greater understanding of the story, the characters and the relationships between them, there will be a common goal and so the performance will make more sense. Overall the performance will effectively create "sense of truth" with the entire ensemble with identical goals and ideas. With everyone knowing what they are trying to achieve rehearsal will be less difficult and complicated. The psychotechnique will have helped me to provide a more believable character with clear intentions and motives. With all actors fulfilling the psychotechnique process the "sense of truth" onstage should help create empathy in the audience and so educate them as Stanislavski set out to achieve. ...read more.