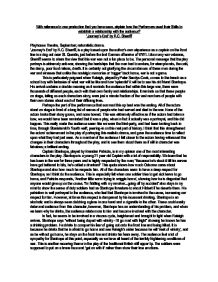 With reference to one production that you have seen, explain how the Performers used their Skills to establish a relationship with the audience? 'Journey's End' by R.C. Sherriff

With reference to one production that you have seen, explain how the Performers used their Skills to establish a relationship with the audience? 'Journey's End' by R.C. Sherriff Playhouse Theatre, September; naturalistic drama. 'Journey's End' by R.C. Sherriff, is a play based upon the author's own experience as a captain on the front line in a dug out near St. Quentin, just before the last German offensive of WW1. Like many war veterans, Sherriff seems to share the view that this war was not a fun place to be. The personal message that the play portrays is extremely anti-war, showing the hardships that the men had to endure, for example rats, the cold, the damp, poor food rations, death. It is certainly not glorifying the circumstances of these men during the war and stresses that unlike the nostalgic memories or 'rugger' back home, war is not a game. This is particularly poignant when Raleigh, played by Peter Sandys-Cook, comes to the trench as a school boy with fantasies of what war will be like and how 'splendid' it will be to see his old friend Stanhope. ...read more.

His erratic movement about stage and gestures reflected Stanhope's 'tough man' exterior well. Patricks was tall, dark, slim, angular and pale which made him look extremely drawn and weary. This reflected the time spent on the front line well as when Raleigh enters we see a young, exuberant and excited face with plenty of colour. The character as a whole was softly spoken except from when giving orders or when riled. He was well spoken, reflecting the British culture and this made him easy to relate to. All of these attributes helped to convey Stanhope to the audience. Costume changes and set design were extremely important to establish a relationship with the audience as they helped to provide a picture of what it was like, hence meaning that the actors were more believable. The whole stage was dark, gloomy and quite eerie, in khaki colours of deep browns and beiges. This gave the performance the frightening and to an extent, unnatural impression of the war that the audience needed to feel. This added to the fear of war that Patricks was portraying and was essential the audience sensed. ...read more.

His death had a great impact on all in the trench, and gave way to some disbelieving and incomprehensive looks from Patricks. Compared to other characters, Sinclair did not have much in that of an orthodox gesture for his character, however he did always seem to be tired and seated at the table, often in a hunched stance. Also, when listening to others, he would incline his head on the side and from time to time be puffing on a real pipe. Often he talked very softly and at pace slower than others, regularly smiling. He seemed to be conscious of what he was saying, and if it was appropriate. Sinclair had a very formal accent, in order to portray the background of Osborne - ex school master. Although each actor personalised their costume, Osborne's was quite standard, and always very smart. Unlike others, he was constantly standing straight and looked proud of his uniform. His make up made him seem older than others and reflected the character well. Overall, the actors used varying skills in order to establish a relationship with the audience, and portray their characters effectively. Sinclair portrayed the front which Osborne puts on well during the break down scene, and Patricks illustrated the vulnerable side rarely seen to Stanhope's character well, in both instances evoking empathy from the audience. ...read more.