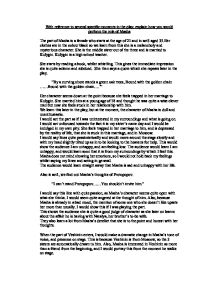 With reference to several specific moments in the play, explain how you would perform the role of Masha.

With reference to several specific moments in the play, explain how you would perform the role of Masha The part of Masha is a female who starts at the age of 21 and in act3 aged 35.Her clothes are in the colour black so we learn from this she is a melancholy and mysterious character. She is the middle sister out of the three and is married to Kulygin. Kulygin is a high school teacher. She starts by reading a book, whilst whistling. This gives the immediate impression she is quite solemn and subdued. She then says a quote which she repeats later in the play. "By a curving shore stands a green oak trees, Bound with the golden chain ......Bound with the golden chain....'" Her character seems down at the point because she feels trapped in her marriage to Kulygin. She married him at a young age of 18 and thought he was quite a wise clever man but now she feels stuck in her relationship with him. We learn this later in the play, but at the moment, the character of Masha is dull and unenthusiastic. I would act the part as if I was uninterested in my surroundings and what is going on. I would act unfocused towards the fact it is my sister's name day and I would be indulged in my own pity. She feels trapped in her marriage to him, and is depressed by the reality of life, that she is stuck in this marriage, and in Moscow. ...read more.

My tone of voice would sound aggressive and angered, and I would be speaking a little louder than usually. I would pause between saying "alone" and "please", to emphasise the please. This would also so my frustration with him to the audience.This tells the audience Kulygin doesn't interest Masha any more, and she no longer is in love with him. At the end of act1 she repeats the quote: "By curving shore stands a green oak tree, bound with a golden chain..." Masha is about to be leaving and going back to her house with her husband whom she does not love any more. I would show this by looking depressed and saying this line quite slowly and be thinking of a better life for me as Masha. In act2, Masha is on stage with Veshinin. They are alone, talking about how unhappy they both are. Masha says "...terribly learned, clever and important, so I thought. And now I don't..." I would say this so Veshinin would feel sorry for me and know that I am welcome for something to happen between the two of us. I would look into his eyes when I talk which would show the audience I love him, and look coldly when I talk of my husband so he knows I don't have any feelings towards Kulygin any more. This shows the audience Masha is interested in Veshinin but doesn't want any one to hear to see, as this conversation takes place in the dinning room of the Prozorov's house. ...read more.

She is the only 1 out of the 3 sisters who experiences true happiness during the duration of the play. The fact that she is actually in love with someone, and for them to love her back, is extraordinary to them. Ironically, Masha is the only one who cannot move back to Moscow, as she is married to Kulygin, who works in the school in the are they live in now. This upsets Masha more, and is another reason why her love for Veshinin is so important, because it is the only happiness she has had since she has moved. But the reality kicks in when they hear someone approaching the room. She has to now go back to her husband who she doesn't love and pretend she hasn't shared any of this information with her sisters. I would now act solemn and upset again, as once again, I, as Masha, would have to be putting up with sharing my life with a man who I do not love. The audience would see how much Masha loves Veshinin by the passion in her voice and actions when telling her sisters about her feelings. In Act4, it is time for Veshinin to say good bye, as this is the day when all the soldiers are leaving. The atmosphere on stage during this act is a lot calmer than the other 3, as everyone on stage knows the stage in their lives with the soldiers it is nearly over. ...read more.