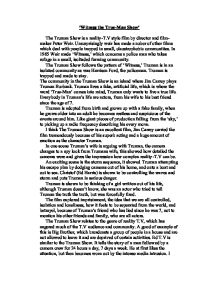 'Witness the True-Man Show' The Truman Show is a reality-T.V style film by director and film-maker Peter Weir. Unsurprisingly weir has made a nuber of other films which deal with peaple trapped in small, claustrophobic communities. In 1985 Weir made 'Witness,' which concerns a police man who takes refuge in a small, isoltaded farming community. The Truman Show follows the pattern of 'Witness,' Truman is in an isolated community as was Harrison Ford, the policeman. Truman is trapped and made to stay. The community in the Truman Show is an island where Jim Carrey plays Truman Burbank. Truman lives a fake, artificial life, which is where the word 'True-Man' comes into mind, Truman only wants to live a true life. Everybody in Truman's life are actors, from his wife to his best friend since the age of 7. ...read more.

In one scene Truman's wife is arguing with Truman, the camera changes to a spy look from Trumans wife, this showed how detailed the cameras were and gives the impression how complex reality-T.V can be. An exciting scene is the storm sequence, it showed Truman attempting his escape plan by dodging cameras out of his home, and onto a boat and out to sea. Christof (Ed Harris) is shown to be controlling the waves and storm and puts Truman in serious danger. Truman is shown to be thinking of a girl written out of his life, although Truman doesn't know, she was an actor who tried to tell Truman the truth the truth, but was forcefully fired. The film explored imprisinment, the idea that we are all controlled, isolation and loneliness, how it feels to be seperated from the ...read more.

It tells the story of a man followed by a camera crew for 24 hours a day, 7 days a week. He at first likes the attention, but then becomes worn out by the intense media intrusion. I think that these types of films started to be made on the late 90's because it deals with a question a lot of people have been thinkign of, Are we all being controlled in some way? I think people who like to watch serious films would enjoy this, because it deals with aspescts and themes of life. People who are Jim Carrey's comedy fans would like this film, because it shows the other aspects and talents of an actor, which all good actors should have. Compared with his role in Ace Ventura: Pet Detective, Carrey shows more of his Oscar winning potential, although ironically he didn't get an Oscar on this occasion. By Sanjay Gambhir ...read more.