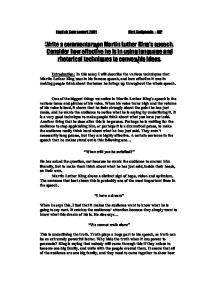 Write a commentary on Martin Luther King&amp;#146;s speech. Consider how effective he is in using language and rhetorical techniques to convey his ideas.

English Coursework 2001 Nick Catigoudis -10P Write a commentary on Martin Luther King's speech. Consider how effective he is in using language and rhetorical techniques to convey his ideas. Introduction: In this essay I will describe the various techniques that Martin Luther King uses in his famous speech, and how effective it was in making people think about the issues he brings up throughout the whole speech. One of the biggest things we notice in Martin Luther King's speech is the various tones and pitches of his voice. When his voice turns high and the volume of his voice is loud, it shows that he feels strongly about the point he has just made, and he wants the audience to notice what he is saying by underlining it. It is a very good technique to make people think about what you have just said. Another thing that he does after this is he pauses. Perhaps he is waiting for the audience to stop applauding him, or perhaps it is a dramatical pause, to make the audience really think hard about what he has just said. ...read more.

It is evident that Martin Luther King feels very strongly against this issue, and he shows it in the tone of his voice. He raises his voice when he is angry and wants to make a point. The last line in the speech shows a lot of things... "Free at last: Free at last: Thank God Almighty, we are free at last!" I think that at this stage he is feeling angry, but at the same time, he knows there is hope, and he knows that he has got this message across to the audience judging by their reaction. He knows that every person in the audience is going to go home and think over and over about what he has just said in his famous speech. He is extremely optimistic, and the audience just seem to follow him. Martin Luther King has personal experience when he is reading this speech. He knows exactly how the audience feels about r****m, because he has been there himself. He is black himself, and has been on the receiving end of r****m. ...read more.

I think he has got the message across extremely well, because I now feel stronger myself against such an issue as r****m. One of the first things King says in his speech is... "The n***o lives on a lonely island of poverty" This isn't only a metaphor, but once again another strong sentence, set to catch the mind of the audience. He also underlines that... "All men are created equal" ...but he then underlines the fact that they are not all treated equally. The speech contains a sense of rhythm, and the use of correct vocabulary leads to the whole speech flowing very nicely. The tempo and volume, and emphasis of certain words or sentences are also very correct, and are extremely useful techniques when it comes down to persuading. Persuading, in my opinion is what Martin Luther King is trying do, and he has completed this. Not only has he completed it, he completed it with a great success. ESSAY STATS. Pages 3 Words 1,136 Characters (no spaces) 5,032 Characters (with spaces) 6,156 Paragraphs 31 Lines 130 ENGLISH Coursework 2001 BY NICK CATIGOUDIS 10p ...read more.