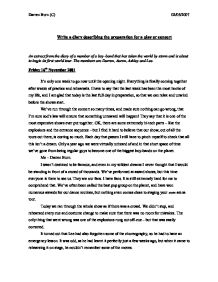 Write a diary describing the preparation for a play orconcert

Write a diary describing the preparation for a play or concert An extract from the diary of a member of a boy-band that has taken the world by storm and is about to begin its first world tour. The members are Darren, Aaron, Ashley and Lee. Friday 16th November 2001 It's only one week to go now until the opening night. Everything is finally coming together after weeks of practice and rehearsals. I have to say that the last week has been the most hectic of my life, and I am glad that today is the last full day in preparation, so that we can relax and unwind before the shows start. We've run through the concert so many times, and made sure nothing can go wrong, that I'm sure sod's law will ensure that something untoward will happen! They say that it is one of the most expensive shows ever put together. OK, there are some extremely hi-tech parts - like the explosions and the entrance sequence - but I find it hard to believe that our show, out of all the tours out there, is costing so much. ...read more.

I've been away from the other guys for the last few days, which is probably a good thing because we have to spend the next six months together. We had to perform on Top of the Pops today. It was our eighth performance, but I still get nervous each time, for no apparent reason. There is something about that show that I still can't quite get over. It never crossed my mind as a child that I would be on the same stage one day. If I have one fault as a performer, it is that I cannot bear to watch myself on video. Ashley and Aaron love it and they have to pick up on all our mistakes. The dance routines are complicated and although I cope fine with them, I always make a small error hoping that no one notices - but, then again, doesn't everyone? A lot of preparation has gone into the show. Our crew of seventy-five people isn't even enough, and some people often find themselves doing more than one job. ...read more.

We're off to a club now to celebrate. I think we deserve it. Sunday 25th November 2001 I can't believe this! The reviews for Friday's show are in the papers today and they are all really good. They said that the opening sequence (where we descend from the ceiling and fly above the audience) was a "piece of stage wizardry" and that the whole show was "perfectly put together and executed". Only The Sunday Telegraph gave us a mediocre review, saying, "The boy-band isn't a patch on the originals". John, our manager, has told us that we have to pull together for Monday's show - but I've been told it was just a spiteful reviewer. After Friday's opening show, I'm a bit more calm and collected knowing that we have made it through the first night. We've got to perform another seventy shows in sixteen countries and it isn't going to be easy - but when I first got involved with the group, and signed my life away, I knew that it would be hard. Darren Burn (C) 02/05/2007 ...read more.