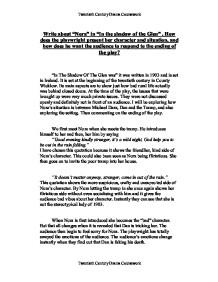 Write about &amp;#147;Nora&amp;#148; in &amp;#147;In the shadow of the Glen&amp;#148; . How does the playwright present her character and situation, and how does he want the audience to respond to the ending of the play?

Write about "Nora" in "In the shadow of the Glen" . How does the playwright present her character and situation, and how does he want the audience to respond to the ending of the play? "In The Shadow Of The Glen was" it was written in 1903 and is set in Ireland. It is set at the beginning of the twentieth century in County Wicklow. Its main aspects are to show just how bad rural life actually was behind closed doors. At the time of the play, the issues that were brought up were very much private issues. They were not discussed openly and definitely not in front of an audience. I will be exploring how Nora's situation is between Michael Dara, Dan and the Tramp, and also exploring the setting. ...read more.

When Nora is first introduced she becomes the "bad" character. But that all changes when it is revealed that Dan is tricking her. The audience then begin to feel sorry for Nora. The playwright has totally swayed the emotions of the audience. The audience's emotions change instantly when they find out that Dan is faking his death. This then becomes a comic element in the play. Then this line occurs in the play. "Don't be afeard stranger, a man that is dead can do no harm" I have chosen this quote because it is such a great quote. It means different things to the audience and to the characters. To some characters this quote would seem very true but to the whole of the audience this quote would seem quite comic. This would seem comic to the audience because it is in a rural area and in 1903. ...read more.

By choosing a life with the tramp she would be choosing a very poor life but maybe a happier life. It is as if the tramp is ahead of his time and is more of a romantic than a stereotypical early nineteen hundreds man. When Nora decides to spend the rest of her life with the tramp, Dan and Michael sit down and have a drink with each other. This shows male bonding. Whilst Dan and Michael are sat drowning there sorrows Nora is of starting a new and better life for herself. This therefore is conclusive evidence that the winner from all this is Nora (the so called badie) and the tramp (just a poor man from the streets). This play was all about showing the public what really does happen behind closed doors, but know one wants to admit it. ?? ?? ?? ?? Twentieth Century Drama Coursework Twentieth Century Drama Coursework ...read more.