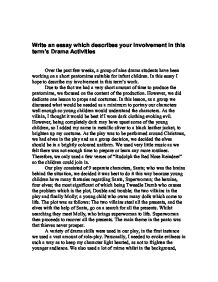 Write an essay which describes your involvement in this term&amp;#146;s Drama Activities

Write an essay which describes your involvement in this term's Drama Activities Over the past few weeks, a group of nine drama students have been working on a short pantomime suitable for infant children. In this essay I hope to describe my involvement in this term's work. Due to the fact we had a very short amount of time to produce the pantomime, we focused on the content of the production. However, we did dedicate one lesson to props and costumes. In this lesson, as a group we discussed what would be needed as a minimum to portray our characters well enough so young children would understand the characters. As the villain, I thought it would be best if I wore dark clothing evoking evil. However, being completely dark may have upset some of the young children, so I added my name in metallic sliver to a black leather jacket, to brighten up my costume. ...read more.

Whilst searching they meet Molly, who brings superwoman to life. Superwoman then proceeds to recover all the presents. The main theme in the panto was that thieves never prosper. A variety of drama skills were used in our play, in the first instance we used a vast amount of role-play. Personally, I needed to evoke evilness in such a way as to keep my character light hearted, as not to frighten the younger audience. We also used a lot of mime whilst in the background, when actors were acting in the foreground. Santa needed to put on a low old voice to evoke the stereotypical Santa. Movement was also important in our pantomime, always making sure we were facing the audience was some times difficult. To work round this problem, any one not in the scene became a director to the other actors; this seemed to work well. ...read more.

In addition, it demonstrates if you persevere in difficult circumstances, you will prosper. However, on the other side of argument it also illustrates poor aristocracy, as in the upper classes always seem to fail, and the peasants always prosper, but in reality it is not always the case. Overall not everything taught in panto is beneficial, but moralistically it can be. In conclusion, I was satisfied with our performance, considering we had a very short amount of time to produce the final product. However, some minor details could have been perfected, with a little more concentration at the vital points. Some parts of our play went better in rehearsal than in the final performance, but this can be put down to nerves. If I did the performance again, I would spend more time on preparation. It would also have been beneficial to participate in more rehearsals, as I think everyone would have gained confidence in their individual performances, and in turn there would have been less nervousness. This would perhaps have made the whole production more professional. ...read more.