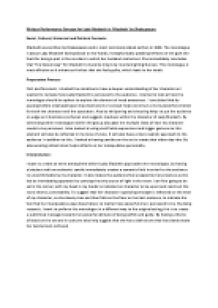 ﻿Written Performance Concept for Lady Macbeth in ?Macbeth? by Shakespeare Social, Cultural, Historical and Political Contexts: Macbeth was written by Shakespeare and is most commonly dated written in 1606. The monologue is about Lady Macbeth having blood on her hands, metaphorically speaking reflects on the guilt she feels for being a part in the murders in which her husband carried out. She immediately concludes that "the fastest way" for Macbeth to become king is by murdering King Duncan. This monologue is most effective as it enhances the fact that she feels guilty, which leads to her death. ...read more.

Also by whispering and shouting helps to put the audience on edge as it illustrates confusion and suggests madness within the character of Lady Macbeth. By witnessing other monologues within the group also gave me multiple ideas of how my character needs to be perceived. I also looked at using vivid facial expressions and bigger gestures as this element will also be reflected in my tone of voice. It will also have a more realistic approach to the audience. In addition to this, I looked at having candles on the set to create that olden day vibe. ...read more.

To suggest that her character is growing stronger is reflected on the level of my character, as she slowly rises and then falls on the floor on her last sentence, to indicate the fact that her manipulative ways have failed, no matter how powerful she is perceived to be. By doing research, I want to perform the monologue in a different way to the original acting; this is to create a subliminal message towards her powerful attitude of being selfish and guilty. By having a theme of black on the set and in costume also help suggest that she has a dark secret that has slowly made her twisted and confused. ...read more.