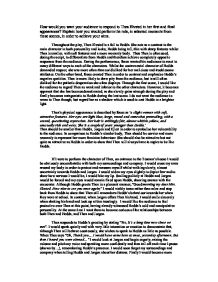 Your audience to respond to Thea Elvsted in her first and final appearances? Explain how you would perform the role, in selected moments from these scenes, in order to achieve your aims. Throughout the play, Thea Elvsted is a foil to Hedda

How would you want your audience to respond to Thea Elvsted in her first and final appearances? Explain how you would perform the role, in selected moments from these scenes, in order to achieve your aims. Throughout the play, Thea Elvsted is a foil to Hedda. She acts as a contrast to the main character in both personality and looks; Hedda being tall, thin with sharp features whilst Thea is smaller, with soft features and a more womanly body. Thus Thea is often used, during the script, to differentiate from Hedda and therefore achieve completely opposite responses from the audience. During the performance, Ibsen wanted his audiences to react in many different ways to each of the characters. Whilst the controversial character of Hedda demanded respect, she was more often than not disliked for her malicious and troublesome attributes. On the other hand, Ibsen created Thea in order to contrast and emphasise Hedda's negative qualities. Thea is more likely to draw pity from the audience, but is still often disliked for the pathetic desperation she often displays. Through the first scene, I would like the audience to regard Thea as weak and inferior to the other characters. However, it becomes apparent that she has been underestimated, as she slowly gains strength during the play and finally becomes antagonistic to Hedda during the last scene. ...read more.

At the same time I want them to become curious of the relationships between both Thea and Hedda, and Thea and Jorgen. Thea responds to Hedda's greeting by stating "Yes, it's a long time now since we met". I would speak quietly and with very little intonation or emotion to demonstrate that, although Thea will behave courteously, she wishes to speak to Hedda as little as possible. When Thea says "Oh, Thank you... I would have come here at once, yesterday afternoon. But then I heard you were abroad..." I would look at Jorgen and begin eagerly; raising the volume and pitch my voice and speaking more confidently and then tail off each time I pause (shown by...), remembering Hedda's presence. I would soon forget my surroundings and company when telling Hedda and Jorgen about her distress. Firstly I would become more fidgety, playing with my hands and pacing the room when "Yes there is. And I don't know another soul here, not anyone I could turn to, apart from you." I would speak quickly, almost impatiently, and raise the pitch of my voice to a whine. To have my desired effect on the audience, I would frown and push out my lower lip, as if I were a child. ...read more.

At this point I want the audience to feel anger towards Thea for having succeeded in gaining Jorgen's attentions and revelling in Hedda's misery. Although Hedda is a cold and difficult character, she is preferable to the audience over Thea, due to her strengths as a person which Thea lacks. When Jorgen suggests Thea should move in Aunt Julle's house where they can work every evening undisturbed and away from Hedda's watchful eye, I would enthusiastically nod and agree rapidly, as if fearful Jorgen will change his mind. When Hedda opposes Jorgen's idea, I would firstly look worried; tensing my body, staring intently at Jorgen with widened eyes and biting my bite, but then, realising Jorgen does not intend give in to Hedda, victorious. To do this I would relax and look over in the direction of the room Hedda sits in and smile to myself before turning my attentions back to Jorgen. When the shot is fired, I would jump immediately to my feet and follow Jorgen into the inner room. Whilst everyone is confused and shouting, I would stop and look at Hedda, unsurprised. I would show little expression on my face, as if indifferent to her death. Knowing that Thea am one of the catalysts of Hedda's tragic end, I want the audience to despise her for being a deciding factor in their anti-hero's suicide. ...read more.