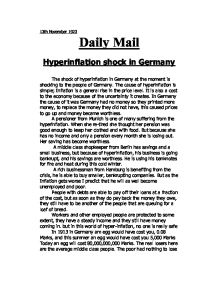 13th November 1923 Daily Mail Hyperinflation shock in Germany The shock of hyperinflation in Germany at the moment is shocking to the people of Germany. The cause of hyperinflation is simple; Inflation is a general rise in the price level. It is also a cost to the economy because of the uncertainty it creates. In Germany the cause of it was Germany had no money so they printed more money, to replace the money they did not have, this caused prices to go up and money became worthless. ...read more.

But because she has no income and only a pension every month she is losing out. Her saving has become worthless. A middle class shopkeeper from Berlin has savings and a small business, but because of hyperinflation, his business is going bankrupt, and his savings are worthless. He is using his banknotes for fire and heat during this cold winter. A rich businessman from Hamburg is benefiting from the crisis, he is able to buy smaller, bankrupting companies. ...read more.

Workers and other employed people are protected to some extent, they have a steady income and they still have money coming in. but in this world of hyper-inflation, no one is really safe In 1913 in Germany am egg would have cost you, 0.08 Marks, and this summer an egg would have cost you 5,000 Marks Today an egg will cost 80,000,000,000 Marks. The real losers here are the average middle class people. The poor had nothing to lose anyway and the rich have their businesses and land to fall back on. ...read more.