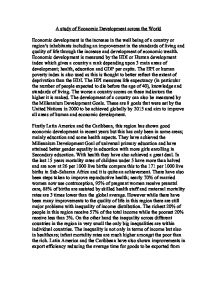 A Study of Economic Development across the world

A study of Economic Development across the World Economic development is the increase in the well being of a country or region's inhabitants including an improvement in the standards of living and quality of life through the increase and development of economic wealth. Economic development is measured by the HDI or Human development index which gives a country a rank depending upon 3 main areas of development; health, education and GDP per capita. The HPI or human poverty index is also used as this is thought to better reflect the extent of deprivation than the HDI. The HPI measures life expectancy (in particular the number of people expected to die before the age of 40), knowledge and standards of living. The worse a country scores on these indicators the higher it is ranked. The development of a country can also be measured by the Millennium Development Goals. These are 8 goals that were set by the United Nations in 2000 to be achieved globally by 2015 and aim to improve all areas of human and economic development. ...read more.

Secondly Sub-Saharan Africa, social indicators of economic development have remained unchanged as an entire region for some time and it is likely that most countries will not achieve the Millennium Development Goals; but looking more closely at individual countries there have been some vast improvements. 29 countries have improved their life expectancy even though it has remained unchanged since 1990 for the whole region. Rwanda made the biggest improvement from 32 to 46 years. Also while the regional incidence of tuberculosis rose between 1990 and 2006 some areas have recorded a decline in incidence rates. Most notable is Somalia which has had great success with TB control programs. Growth in this region has been faster in recent years, 4.7% a year in 2000-06, but the depletion of natural resources is also occurring at an increased rate, forests in the region are shrinking at a rate of 7% per decade. The region's adjusted net savings which measure sustainability of growth are negative which means that the growth is not sustainable and this will cause economic development to halt or for standards to decrease as there is no money for government spending. ...read more.

Most of the output was contributed by China as they produced 2.5 trillion kilowatts so most development would be there with less occurring across other countries in the region. However the region is heavily reliant on coal to produce much of its electricity which shows a lack of development because coal burning destroys the environment and lowers the quality of life for the regions inhabitants as it causes acid rain and asthma. Foreign direct investment to developing countries has surged since 2002 and investment to East Asia and the Pacific has grown even faster than other developing regions. In 2006 more than half of all investment to developing countries went to this region and this provides them with more opportunities to develop economically. So overall Latin America and the Caribbean is the most economically developed region followed closely by Asia. However Asia's reliance on unclean energy sources has caused standards of living to deteriorate meaning slower economic development. Sub-Saharan Africa is very underdeveloped and they don't show much sign of reaching the development goals set globally. ...read more.