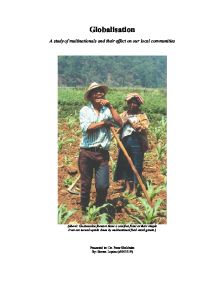 Globalisation A study of multinationals and their effect on our local communities (Above: Guatemalan farmers show a carefree front as their simple lives are turned upside down by multinational food retail giants.) Presented to: Dr. Peter Sheldrake By: Steven Leptos (s3053319) Table of Contents Section Page Executive Summary 3 Introduction to Globalisation 4 - 6 Definition 4 Pro-Globalisation 4, 5 Anti-Globalisation 5, 6 Globalisation & Multinational Companies Social Impact 7-9 Branding 7 Multinationals 7-9 The Food Chain; Survival of the Biggest - (Case Study) 10-15 Introduction 10-12 Guatemala's Local Farmers 13-15 Conclusion 16, 17 References 18-20 Executive Summary This paper attempts to make sense of globalisation from a social and business perspective. Initially I will talk briefly about globalisation within our community and the different stand points those communities and individuals have taken; for and against globalisation. I will then talk about the multinational companies that have made the phenomenon of globalisation possible and these companies various impacts on societies and local communities around the world. The topic is further analysed by using multinational food retailing companies in Latin America as a case study. Displayed to the reader through this case will be a clear indication of how local communities and in particular their farmers are affected by globalisation and multinational companies. There are many different views on globalisation; and those against it oppose many different aspects of it. One of the countless reasons why there are anti-globalisation activists is due to the following: Multinational food retailing companies, the backbone of what is known as 'globalisation' within the supermarket industry, have in many cases entered small farming communities around the globe and destroyed a way of life for many of the farmers and labourers around them. Within Latin America these farmers have been forced to flee their homes to find refuge within the slums of the urban sprawls within their cities or even to cross borders into the USA. ...read more.

'Commodity prices have fallen dramatically, by some two thirds over the past 30 years, so that farmers have had to triple production just to maintain their incomes. One example among many: in just the last three years, Tanzanian farmers experienced a decline of 50% in the price of coffee.' (OXFAM 2001) 'While farmers earn less, consumers have been paying more.' (O'Neill 2001) Although, according to the U.N. Food and Agriculture Organisation, Latin America produces four times the amount of food needed to feed the population, 58 million people are still malnourished. Introduction: During the 1980's a transformation within Latin America began; this transformation was one that would shape the future of farmers all over the continent for decades to come. For some it would be a positive change, however a large majority found it to be the opposite. The transformation I talk about is opening up of trade barriers within Latin America in order to allow food retailing companies access to the regions 'un-commercialised' and fertile lands. During the 1990's the revolution in food retailing within Latin America accelerated extraordinarily as countries unbolted their economies to suit conditions for financing from the International Monetary Fund and the World Bank. As Latin America's overall FDI significantly increased; multinational food retailers bought out local chains and entered joint ventures with the obstinate ones. The greatest fears for farmers in the region were realised when the multinational companies introduced unfair trade rivalry from American and European growers with weighted financial backing. Small farmers are constantly left to compete with the biggest world players as these food retailing chains (products of globalisation) move from large cities to smaller towns and from economically sound countries to ones still developing their economic and social systems (Dugger 2004). These chains are now the prevailing force in the trade of processed foods and they're produce sales are growing to a similar reputation. ...read more.

The reason for this is due to the fact that there were; only on occasion, very rare and unusual success stories to be found about smaller farmers succeeding in their sales to companies such as Ahold and Walmart, within Latin America. After researching farming communities' around the globe, it can be deduced that Latin America is not alone in this battle to produce food and sell it at competitive prices, while still maintaining some sort of meaningful social existence. Asian, African and Indian farmers; have been heavily exploited. Even farmers within more developed countries such as Australia have had to sell their products at severely discounted prices in order to satisfy multinational company standards. Farmers world wide, are however, not alone. Traditional strategies of help to farmers that feel the hardships of globalisation, such as providing fertilizers and improved seeds, are no longer enough to enable them to sustain their businesses. Professors and agronomists are banding together to document trends and develop new methods of help that will allow the fleeing farmers of Latin America, Africa and Asia to compete with others in selling products to the multinationals. In the midst of the these methods a few techniques stand out, such as; regulations put upon the multinationals that require farmers be paid promptly, laws that restrain these companies from dominating entire markets (such as mergers of supermarket chains) and enhanced hygiene and convenience through technology at open-air markets. After reading this paper I hope you too can conclude it is important that societies living within the limitations of this amazing world are given the chance to experience life's pleasures and break out of the chain of inevitable failures that multinational corporations have brought to them. Being given the chance to make an honest and fair living, is only basic compassion and mercy; two marvellous characterises that any individual can encompass. If multinational food retail companies and global companies in general were able to, in some way, display this, then Anti-Globalisation would be a much less used expression. ...read more.