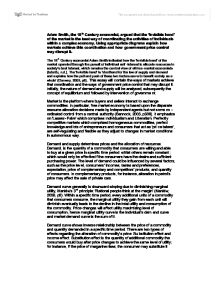 Adam Smith, the 18th Century economist, argued that the ‘invisible hand’ of the market is the best way of coordinating the activities of individuals within a complex economy. Using appropriate diagrams explain how markets achieve this coordination and how government price control may disrupt it.

The 18th Century economist Adam Smith indicated how the ‘invisible hand’ of the market operated through the pursuit of individual self-interest to allocate resources in society’s best interest, which remains the central view of all free-market economists (tutor2u, n.d.). The ‘invisible hand’ is ‘shorthand for the law of supply and demand and explains how the pull and push of these two factors serve to benefit society as a whole’ (Conway, 2009, p6). This essay will contain the ways of markets achieve that coordination and the ways of government price control that may disrupt it. Initially, the nature of demand and supply will be analysed, subsequently the concept of equilibrium and followed by intervention of government.

Market is the platform where buyers and sellers interact to exchange commodities. In particular, free market economy is based upon the disparate resource allocation decisions made by independent agents but not some co-ordinated control from a central authority (Bannock, 2003, p306). It emphasize on ‘Lassez- Faire’ which comprises Individualism and Liberalism. Perfectly competitive markets which comprised homogeneous commodities, perfect knowledge and lots of entrepreneurs and consumers that act as ‘price takers’, are self-regulating and flexible as they adjust to changes in market conditions in autonomous way.

Demand and supply determines prices and the allocation of resources. Demand, is the quantity of a commodity that consumers are willing and able to buy at a given price in specific time period whilst others remain constant; which would only be effective if the consumers have the desire and sufficient purchasing power. The level of demand could be influenced by several factors, such as the price level, consumers’ incomes, tastes and preferences, expectation, price of complementary and competitors’ products, and quantity of consumers. In complementary products, for instance, alteration in petrol’s price may affect the sale of private cars.

Demand curve shows inverse relationship between the price of a commodity and quantity demanded in a specific time period. There are two types of effects regarding the alteration of commodity’s price: Substitution effect and Income effect. Substitution effect is the quantity of additional commodity the consumers would buy after price changes to achieve the same level of utility; for instance, if the price of margarine rises, the consumer may substitute it with butter. Moreover, income effect is the change in quantity demanded due to alteration in purchasing power regarding as the impact of alteration in commodity’s price; for instance, if consumers’ incomes increase, they may increase consumption. Together, both effects determine the ‘price elasticity of demand’ for the commodity. 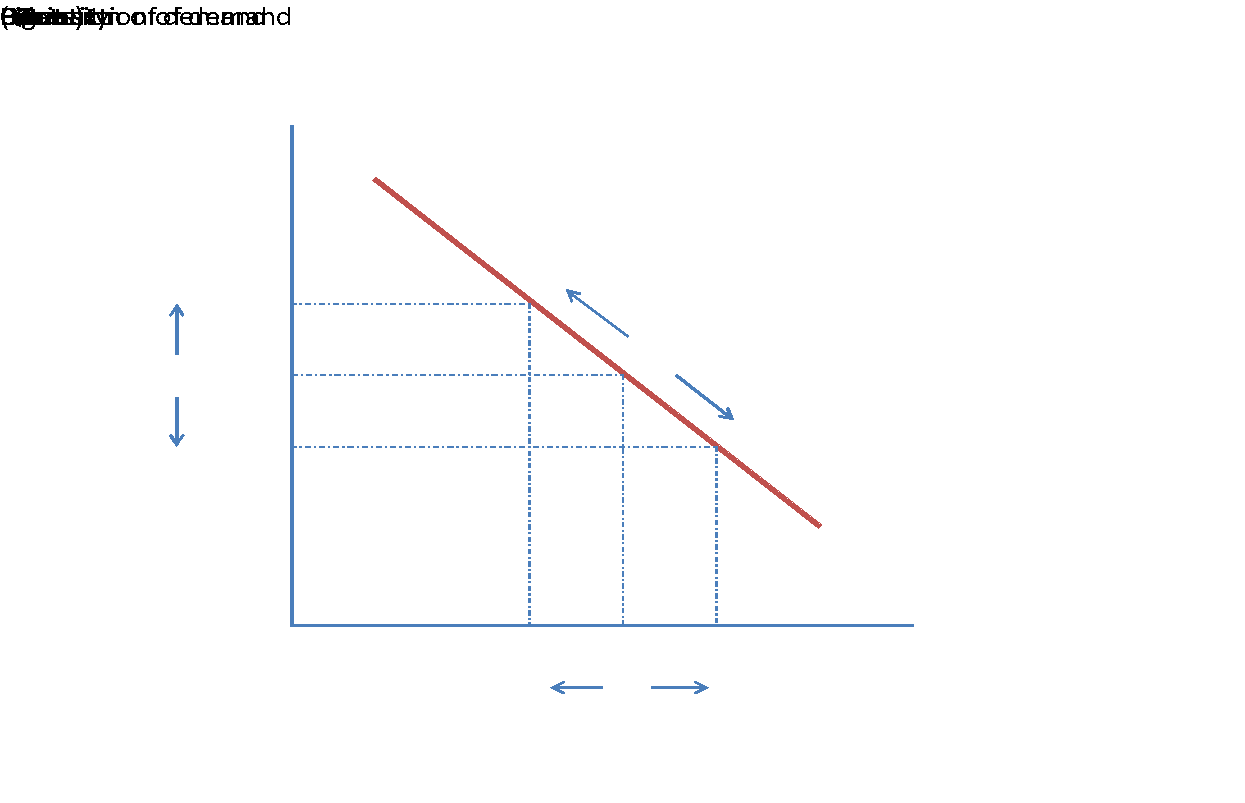 The demand curve for a commodity will shift if the desire and purchasing power of the customers are more or less than before, which known as change in demand. There are several factors that may cause shift, including a change in income, marketing policies, quantity of consumers, price of substitute and complementary products, weather, events and social patterns. As an exemplification:

Supply is the quantity of a commodity that will be supplied at a given price in a specific time period, whilst others remain constant. Its curve is usually upward-sloping. 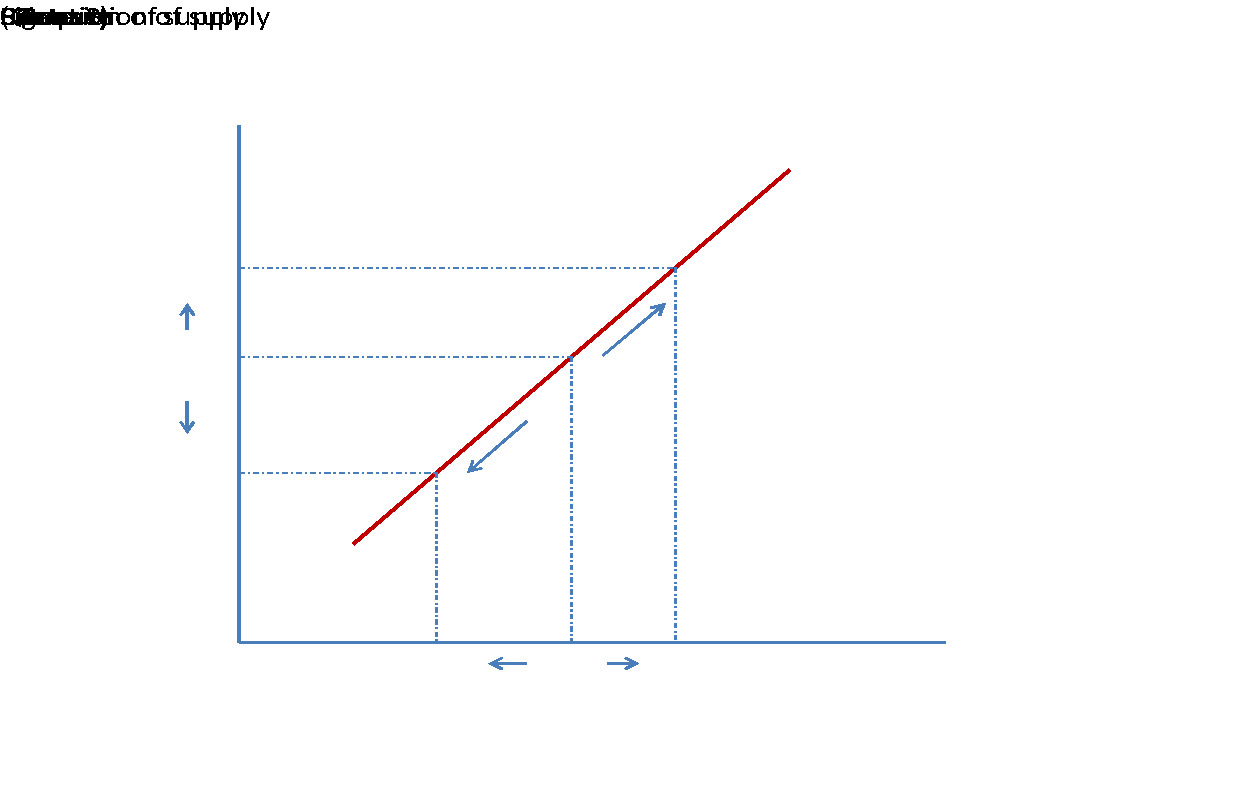 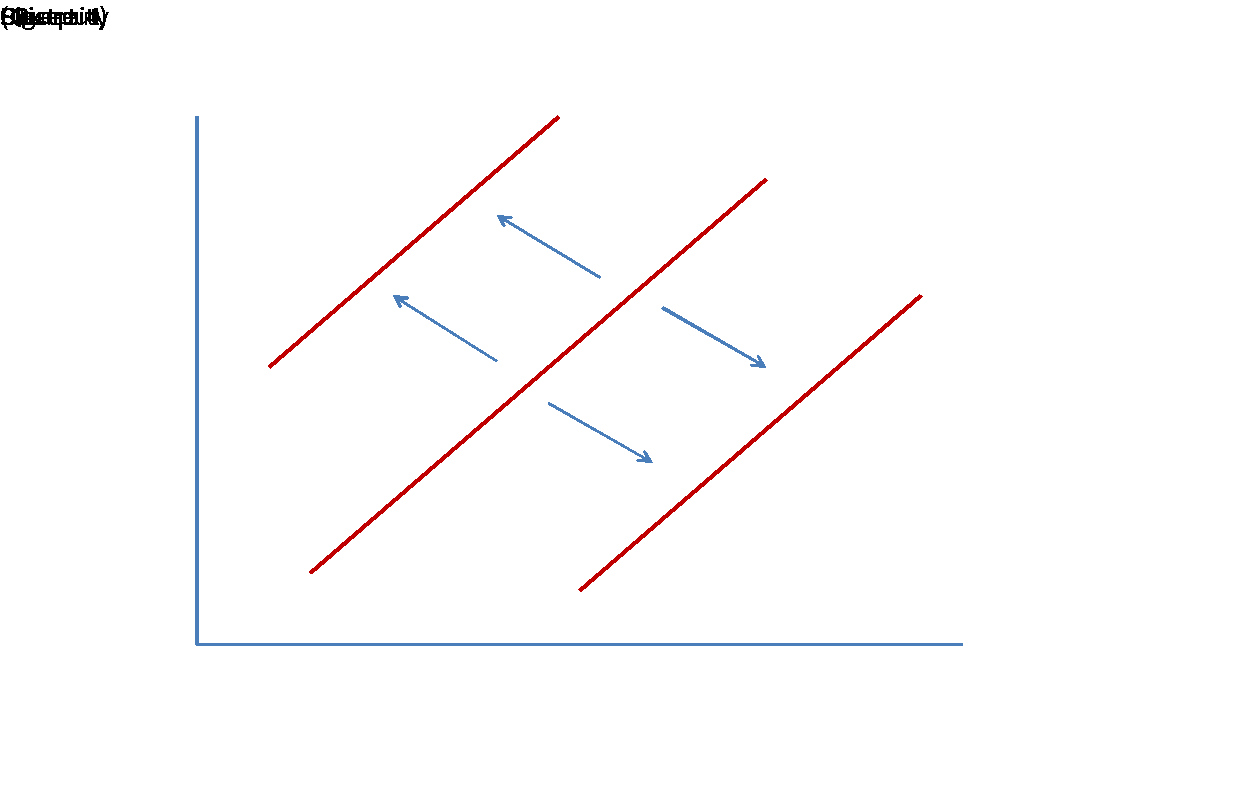 Demand, supply and price are ‘the bedrock of market economics’ (Conway, 2009, p11). Equilibrium means a state of equality between demand and supply, which means no-one face any incentives to change their behaviour. According to Pareto Optimum, it is ‘impossible to make someone better off without making someone else worse off’ (Sloman, 2007, p189). Market equilibrium occurs when ‘all buyers and sellers are satisfied with their respective quantities at the market price’ (Bernanke, 2004, p64). Equilibrium price is known as market-clearing price; at this stage, excess demand or excess supply will not exist; similarly applies to equilibrium quantity. However, alteration in the conditions of demand and supply will shift the curves, which cause changes in equilibrium price and quantity in the market economy. The idea could further illustrate in Figure 5 and 6 below, which modified by Gillespie (Gillespie, 2007, p75-76). 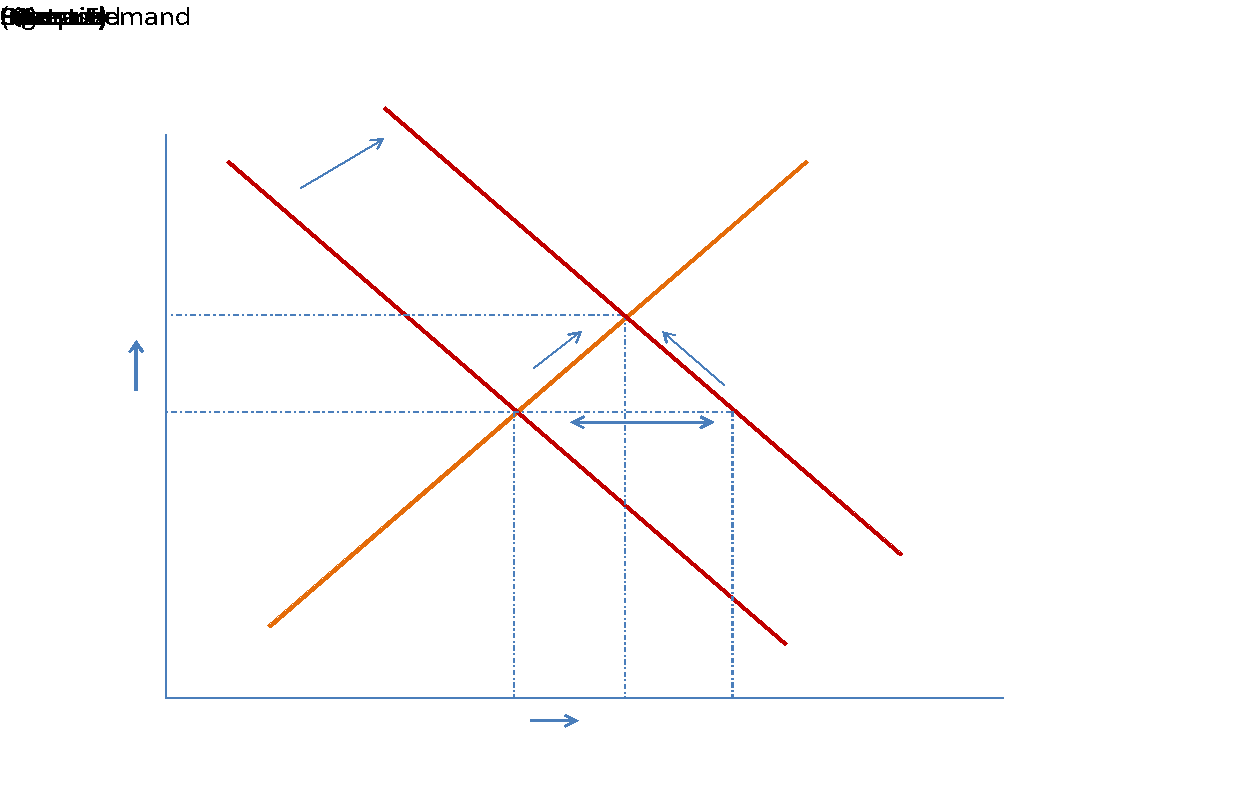 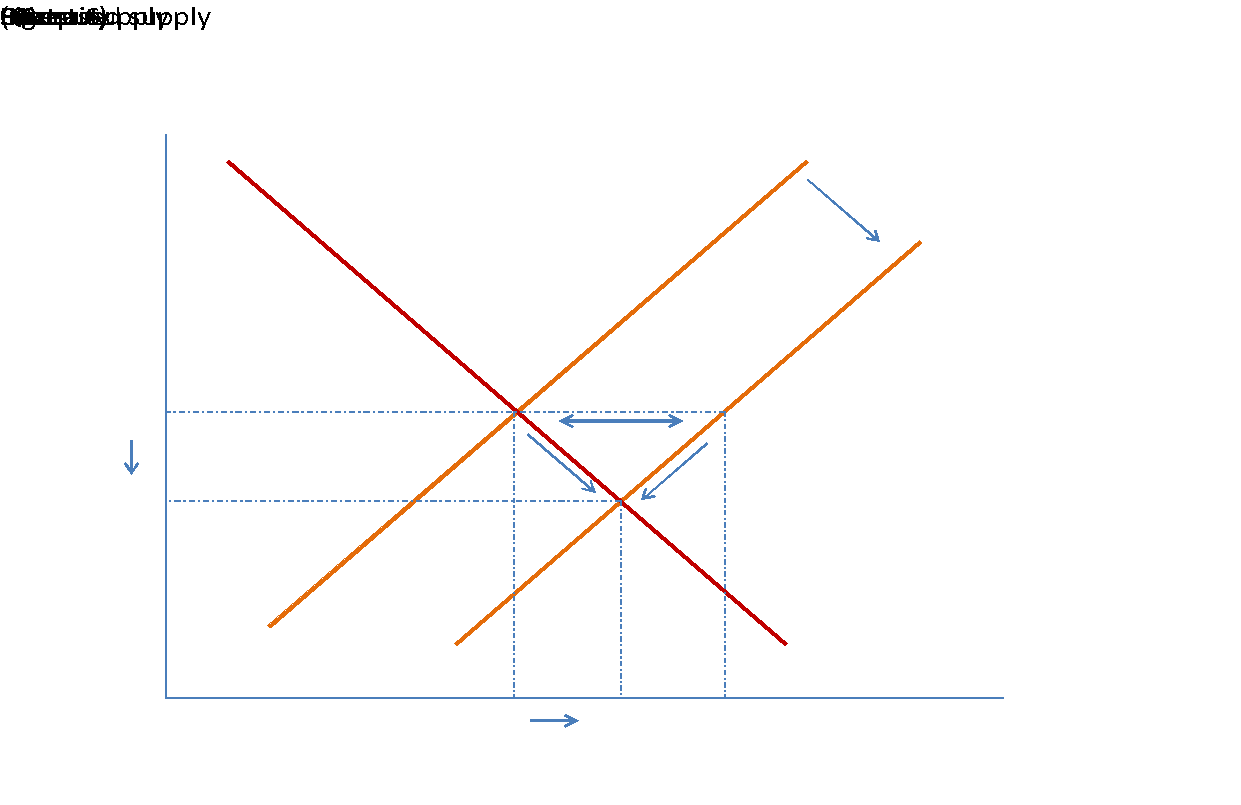 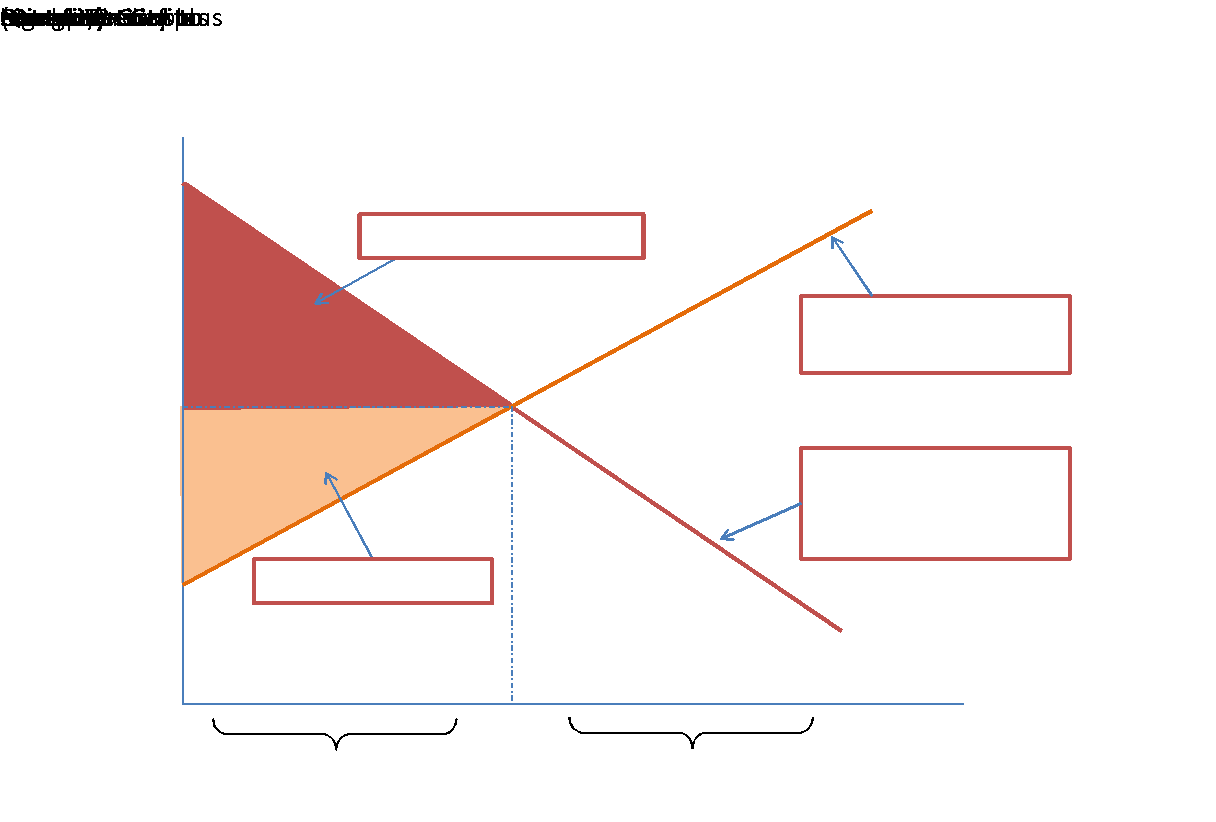 Marginal social costs comprise private and external costs whilst marginal social benefits comprise private and external benefits. Externalities could be positive or negative; for instance, when social benefits greater than private benefits, it is a positive externalities. External costs will steer level of production and consumption above the socially efficient level; or vice versa. ‘In perfect free market system the market forces of supply and demand would lead to the optimal allocation of resources whereas social marginal benefit equals the social marginal cost and community surplus is maximised.’ (Gillespie, 2007, p102)

Price mechanism, the salient feature of a free market economy, acts as the signalling and incentive function as well as rationing device on resource allocation, which is corresponding to Mankiw’s 4th principle: ‘People respond to incentives’ (Mankiw, 2008, p7). Price enables ‘transmission of preferences’ that assists the information flow between entrepreneurs and consumers (Tutor2u, n.d.). However, resource allocation will only be efficient if the price accurately reflect marginal social costs and benefits of consumption and production; whilst having good levels of information flow and resources mobility in the market economy. Thus, market failure will occur when the ‘signalling and incentive function of the price mechanism fails to operate optimally leading to a loss of economic and social welfare’ (ibid, n.d.)

Price control is a pricing system determined by the government that dictates the prices of a commodity. It could be demonstrate in Figure 7-8. 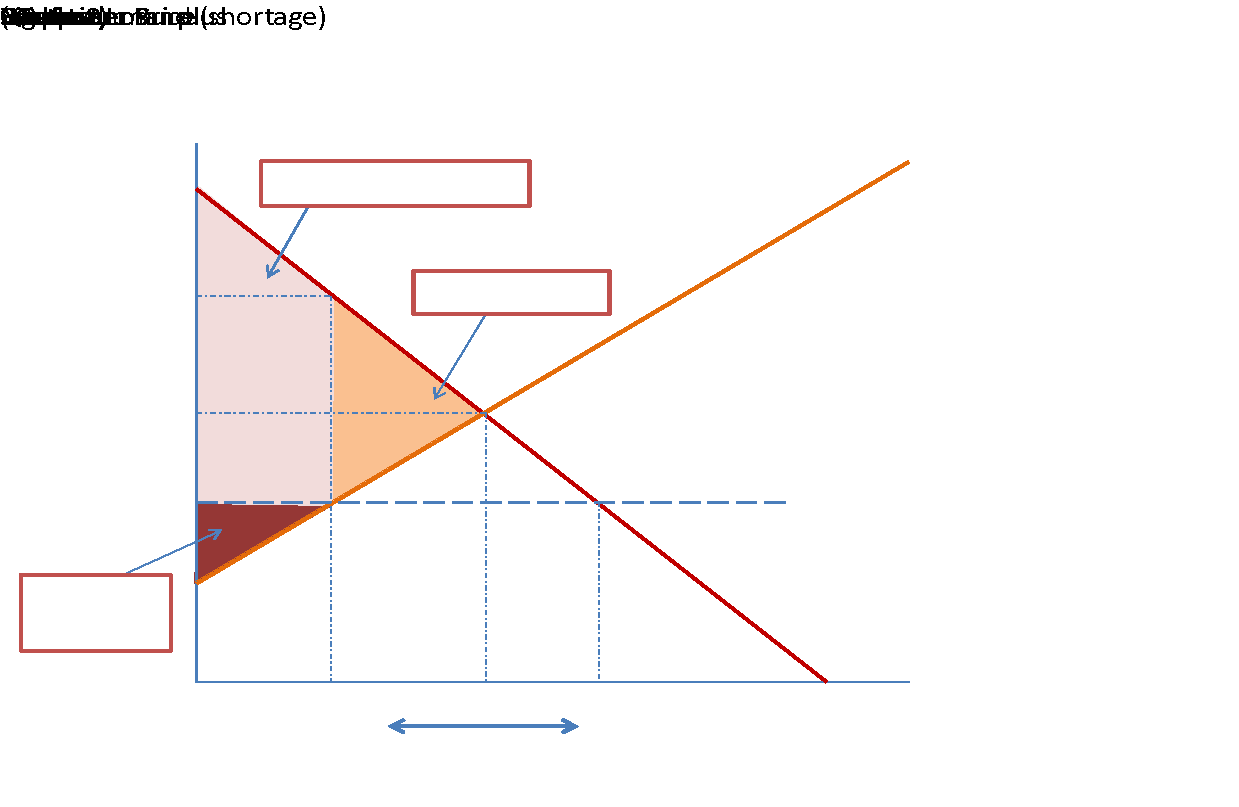 Price ceiling is conducted to make consumers better off. If it is below the equilibrium, (P0 in Figure 8), a shortage will be formed (Q2→Q1), which then lead to welfare loss as in free market economy, price would rise and reach equilibrium at PE. 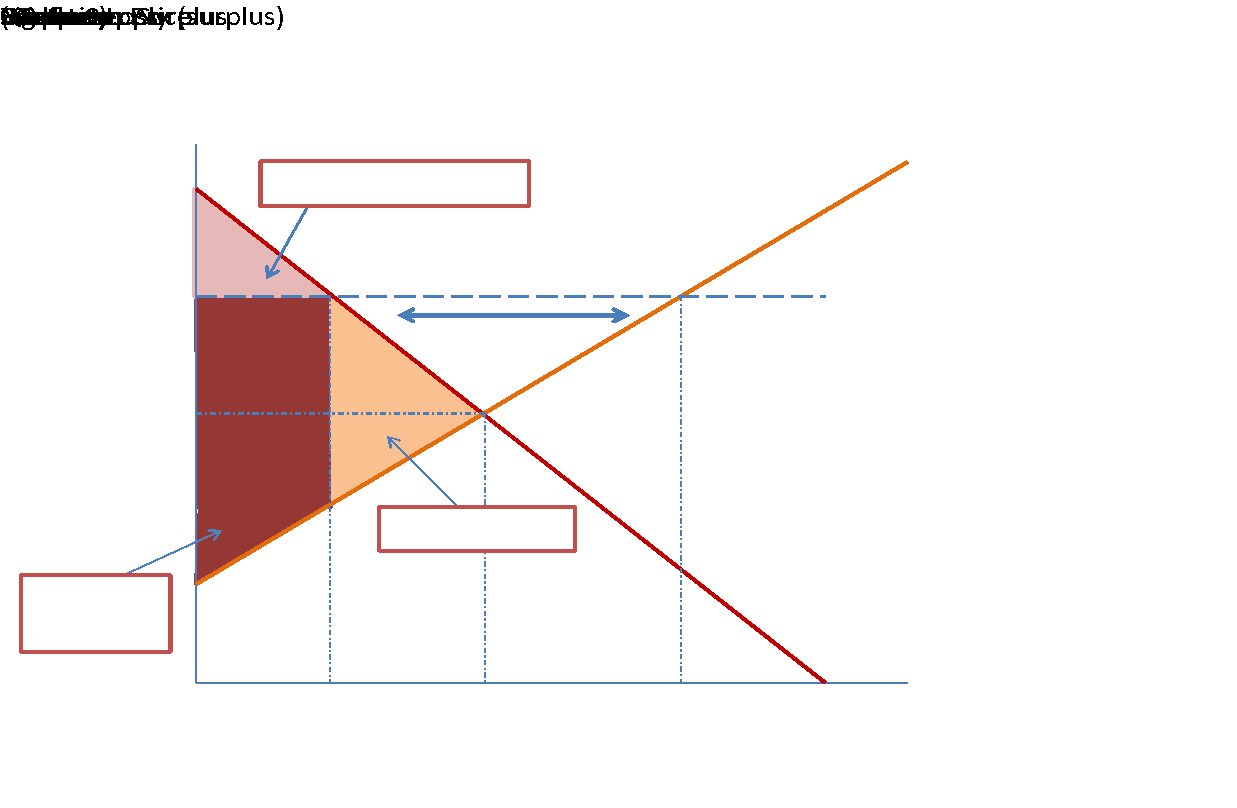 Price floor, is conducted to make entrepreneurs better off. If it is above equilibrium, (P0 in Figure 9), surplus will be formed (Q2→Q1) which then lead to welfare loss as in free market economy, price would fall to reach equilibrium at PE.

However, if government require complete control on a business, it may use nationalisation, which means transferred private company’s ownership into public sector. Government intervention may also lead to issues such as valuation problems, Bureaucracy and lack of incentive. Bureaucracy, for instance, decision-makings may be time-consuming and lack of accuracy as it involved various groups. Moreover, it may virtually encourage the criminal and corrupted activities, such as the ‘black markets’, namely, illegal free markets.

Taking everything into consideration, certain conclusions can be drawn. In free markets economy, price and allocation of resources are determined by demand and supply conditions, which their alterations would steer to new equilibrium price and quantity. In addition, government may intervenes the markets in terms of price controls as attempting to remedy market failures and imperfections which however may lead to corruption and inefficiency of allocation and production.