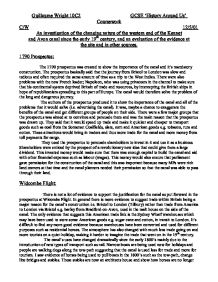 An investigation of the changing nature of the western end of the Kennet and Avon canal since the early 19th century, and an evaluation of the evidence at the site and in other sources.

Guillaume Wright 10C2 GCSE 'History Around Us' Coursework C/W 12/5/01 An investigation of the changing nature of the western end of the Kennet and Avon canal since the early 19th century, and an evaluation of the evidence at the site and in other sources. 1790 Prospectus: The 1790 prospectus was created to show the importance of the canal and it's mandatory construction. The prospectus basically said that the journey from Bristol to London was slow and tedious and often required the same amount of time as a trip to the West Indies. There were also problems with the new French leader; Napoleon, who was using privateers in the channel to make sure that his continental system deprived Britain of trade and resources, by intercepting the British ships in hope of republicanism spreading to this part of Europe. The canal would therefore solve the problem of the long and dangerous journey. The authors of the prospectus produced it to show the importance of the canal and all of the problems that it would solve (i.e. advertising the canal). It was, maybe a chance to exaggerate the benefits of the canal and get different groups of people on their side. There were a few major groups that the prospectus was aimed at to convince and persuade them and was the main reason that the prospectus was drawn up. They said that it would speed up trade and make it quicker and cheaper to transport goods such as coal from the Somerset Coalfields, slate, corn and American goods e.g. tobacco, rum and cotton. ...read more.

Because of this and as they didn't want the canal to be seen as an eyesore they applied conditions for the canal builders such as four ornamental bridge (costing 2,200 pounds) and the canal to be sunken down into a ditch and these features are predominant in the print so as to advertise the best parts of the canal. It was produced to show a picturesque scene, set on a calm, sunny day with a beautiful canal which was a comparison to other fashionable cities such as Venice, which improved the area's credibility, especially for the more wealthy as these would bring more money to the area. In the 1700's Bath had built up a reputation of a beautiful Georgian town for the wealthy and offered luxurious attractions such as the Guillaume Wright 10C2 GCSE 'History Around Us' Coursework C/W 12/5/01 Roman Baths, and so Sydney Gardens wanted to attract these wealthier people to their park for a larger profit and an excellent and maintained reputation. Dundas Aqueduct The Dundas Aqueduct funded by Charles Dundas, was one of John Rennie's greatest architectural achievements when he built the canal. There was a crane and a few warehouses along the canal which suggests the lifting and storing of goods such as cotton and rum from Britain's West Indian trade, rather than coal because this was often transported loosely. There is very little other evidence to suggest trade from the West Indies apart from these warehouses (storing goods in transit to London) to Britain and Dundas Aqueduct mainly consists of evidence of home-based trade such as the bulge (Dundas Marina) ...read more.

For the purpose of contradicting this statement, I can say that, no where in the prospectus is the Somerset Coal canal mentioned and it suggests that the main purpose of the canal was to create an inland navigation system from Bristol to London to benefit trade from the West Indies as well as home trade, by by-passing the long, tedious and dangerous journey across the channel. In fact the prospectus was drawn up in 1790; before the Somerset Coal canal was even built (1804-5), suggesting that the Somerset Coal canal just wanted to benefit from the Kennet and Avon canal rather than the Kennet and Avon being built purposefully for the coal canal. There is no specific mention of coal among the 'home trade' section of the prospectus and there is also the fact that we saw evidence of other types of home trade around the canal such as 'Hugh Baird's' maltsters who used barley from places such as Bradford on Avon to make alcohol. There was also plenty of information at the Devizes museum explaining the canal's use as a method of transit for West Indian goods. There are no reasons that can support this statement fully, but there is evidence of coal being transported along the canal such as the warehouses at Dundas and Sydney Gardens. This isn't true but a major result of the construction of the Kennet and Avon canal was that it was beneficial to the Somerset Coal canal, shown by the entrance at Dundas which links the canals together. Again coal is mentioned as information in the Devizes museum as a good associated with the Kennet and Avon. Overall, I think each site we visited was good at helping us understand the old uses of the Kennet and Avon canal. ...read more.