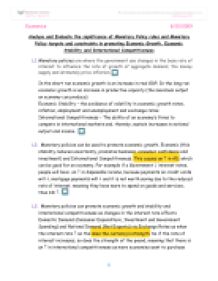 Analyse and Evaluate the significance of Monetary Policy rules and Monetary Policy targets and constraints in promoting Economic Growth, Economic Stability and International Competitiveness L1. Monetary policies are where the government use changes in the base rate of interest to influence the rate of growth of aggregate demand, the money supply and ultimately price inflation. In the short run economic growth is an increase in real GDP, In the long run economic growth is an increase in productive capacity (the maximum output an economy can produce) Economic Stability - the avoidance of volatility in economic growth rates, inflation, employment and unemployment and exchange rates. International Competitiveness - The ability of an economy's firms to compete in international markets and, thereby, sustain increases in national output and income. L2. Monetary policies can be used to promote economic growth, Economic (this stability reduces uncertainty, promotes business, consumer confidence and investment) and International Competitiveness. This causes an ? ...read more.

It is said that low and stable rates of inflation provide the framework for economic stability as inflation reduces the purchasing power of money. When the government uses monetary policy to reduce the rate of inflation inflation targeting) they can stop economic stability from becoming unstable as when inflation occurs, and usually wage growth ? there is a danger that inflation will become out of control so much so that producers and consumers are no longer able to use the signalling function so it can become clear what goods and services consumers most want. Inflation targeting makes the consumers and investors more clear about the future and so they know what to expect so they can plan ahead. This can cause an ? in C and I and therefore and ? in AD (shifting the AD curve to the right). The fact that inflation targeting is flexible means it meets the policy target. The government can use Monetary to policy to ? ...read more.

For example Inflation targeting has to be guided by forecasts of inflation and all macroeconomic variables that affect inflation. It also costs a great deal to employ people who have the ability to forecast inflation well which could cost a lot to employ someone capable of doing this, this means that it ? costs, which means the possibility of an opportunity cost involved as that money could have been spent on something else for example new hospitals. There can also always be unforeseen circumstances such as unexpected recessions and natural disasters such as the tsunami, this affects the Central Banks ability to deliver economic stability and economic growth as they do not know if they may need to be doing other policies to help these unexpected situations, as they may only be able to do so when the economies conditions are stable. To conclude Monetary rules and Fiscal Policy targets and constraints can promote Economic Growth, Economic Stability and International Competitiveness, however there are many factors to take into account when doing so. ?? ?? ?? ?? Katie Scott Homework Economics 8/10/2009 1 ...read more.

****
Mostly sound analysis with some errors. The use of arrows is annoying and saves very little time