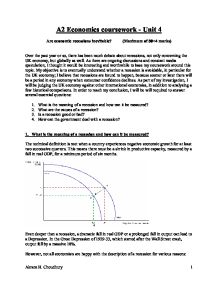 A2 Economics coursework - Unit 4 Are economic recessions inevitable? (Maximum of 80+4 marks) Over the past year or so, there has been much debate about recessions, not only concerning the UK economy, but globally as well. As there are ongoing discussions and constant media speculation, I thought it would be interesting and worthwhile to base my coursework around this topic. My objective is to eventually understand whether a recession is avoidable, in particular for the UK economy; I believe that recessions are bound to happen, because sooner or later there will be a period in any economy when consumer confidence declines. As part of my investigation, I will be judging the UK economy against other international economies, in addition to analysing a few historical comparisons. In order to reach my conclusion, I will be will required to answer several essential questions: 1. What is the meaning of a recession and how can it be measured? 2. What are the causes of a recession? 3. Is a recession good or bad? 4. How can the government deal with a recession? 1. What is the meaning of a recession and how can it be measured? The technical definition is met when a country experiences negative economic growth for at least two successive quarters. This means there must be a shrink in productive capacity, measured by a fall in real GDP, for a minimum period of six months. Even deeper than a recession, a dramatic fall in real GDP or a prolonged fall in output can lead to a Depression. In the Great Depression of 1929-33, which started after the Wall Street crash, output fell by a massive 18%. However, not all economists are happy with the description of a recession for various reasons: * Statistics may not be precise. Often GDP statistics are inexact and need to be rounded down. Conversely, figures can be revised up as well as down. ...read more.

The government wanted to maintain a strong currency so they chose to join the Exchange Rate Mechanism. This engendered high interest rates of 15%, causing a big drop in AD. The recession lasted just over a year (5 quarters), prolonged by the government's persistence to stay in the ERM, only to it leave later. In 2008-2009 much of the industrialised world entered into a deep recession, sparked by a financial crisis that had its origins in reckless lending practices involving the origination and distribution of mortgage debt in the USA.10 Nonetheless, we still find ourselves questioning how long this current recession will last. There is no obvious answer and recessions can vary in time. It depends on how they were brought about, what actions the government and consumers take, and how they respond. 11 Besides time, we can also contrast the depth of the prior recession with the current one. 12 These graphs show that, in spite of most gloomy unemployment reports, the starting level is below what it was last time. As of yet, we are still to reach those heights, and the same line gradients indicate that people are losing jobs at roughly the same speed as last time. 3. Is a recession good or bad? 13 Like most things, there are both positive and negative results. A recession can be beneficial to an economy in the long run. As consumer spending tightens up, inefficient businesses will struggle to continue to operate and good businesses will perform better. It also reminds us of the risks in investing in the stock market. But, in my opinion, the most central benefit of such a period is that it forces us to look at some main problems we which we often ignore. E.g. not sufficient regulation in the financial sector. 14 15 An economic decline is likely to reduce the income of businesses, so firms will experience a decline in profitability. ...read more.

Although there are many benefits, I feel that they are constrained by the harmful effects. Even though some economists argue that a recession can improve the efficiency of markets, it would probably be wiser to uphold a stable economy so that greater assurances can enable people to plan ahead. 4. Ultimately, the solutions are disputed between the free market systems vs. government regulations. In favour of capitalists, the argument is that the markets will adjust in the long run. But this recession has been tagged as the deepest since the Great Depression and the harsh outcomes for most people clearly exemplify the need for government assistance. To overcome the concerns, governments should try and mitigate the ramifications. This has been the case as governments around the world have had to come together to combat the crisis; the G20 meetings and the collective policies are visible indications of tackling the problems. These are to be achieved through expansionary policies, but they must be cautious and prevent market failure turning into government failure, if their strategies exacerbate the conditions of the markets. As various economists have said, a government's role is to "take away the punch bowl just as the party gets going". So finally, are recessions inevitable? After much scrutiny I believe that, theoretically speaking, it is possible. However, in practice it will be unlikely. Even if governments do their best to utilise their economic instruments and political rhetoric, we now live in a smaller world where countries are increasingly integrated economically. As we have witnessed, the sub-prime bubble in America burst onto the international scene, toppling the dominoes of confidence via the cumulative causation effect. That is not to say that the government should not try. In fact, they should learn from any past mistakes and realise that more regulation is required in areas such as finance, where the circumstances of an economy can hinge. Additionally, the volatility of the business cycle should be dampened to sustain a long period of unwavering economic growth. In this way, many nations will prosper for a long time to come. ...read more.