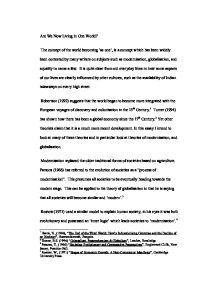 Are We Now Living in One World?

Are We Now Living in One World? The concept of the world becoming 'as one', is a concept which has been widely been contested by many writers on subjects such as modernisation, globalisation, and equality to name a few. It is quite clear from out everyday lives in how some aspects of our lives are clearly influenced by other cultures, such as the availability of Indian takeaways on every high street. Robertson (1992) suggests that the world began to become more integrated with the European voyages of discovery and colonisation in the 15th Century.1 Turner (1994) has shown how there has been a global economy since the 17th Century.2 Yet other theorists claim that it is a much more recent development. In this essay I intend to look at many of these theories and in particular look at theories of modernisation, and globalisation. Modernisation replaced the older traditional forms of societies based on agriculture. Parsons (1966) has referred to the evolution of societies as a "process of modernisation". This presumes all societies to be eventually heading towards the modern stage. This can be applied to the theory of globalisation in that he is saying that all societies will become similar and 'modern'.3 Rostow (1971) used a similar model to explain human society, in his eyes it was both evolutionary and possessed an 'inner logic' which leads societies to 'modernisation'.4 In the opinion of Giddens (1990), globalisation originated from modernisation. It is a continuation of the trends from modernisation processes in 18th Century Europe. Modernisation is based on processes of disembedding. It 'dis-embeds' feudal individuals from fixed identities in space and time. This is known as the 'time-space distanciation', which I shall examine in further detail shortly. It is used to explain the historic move from traditional to modern societies and the part played by globalisation in speeding up the modernisation process. 5 Giddens (1991) ...read more.

This also meant that time to different societies were different, as their neighbours would use different measurements of time. The invention of the clock is significant to this as it allows one measure of time to be universalised and not narrow and locally defined. This can reduce the sense of social distance between communities. The sense of time is now global, as there is now only one concept of time in the world. Distances appear to have 'shrunk' as one community is using the same concept of time as one on the other side of the world.23. In this sense, it can be said that modernisation 'dis-embeds' the individual from their fixed identity in time and space. The two mechanisms Giddens (1991) claims are processes of 'disembedding' are symbolic tokens and expert systems. Money is used as an example of symbolic tokens as it was not used in traditional times; economic exchange was based upon local and particularistic expressions of value. With modernisation comes money as a universal form of exchange. Money, as time, acts to make general and universal what once were particularistic and local exchanges. As the current main form of exchange, money can make the world seem as one as it allows individuals to move between local contexts and can therefore establish social relations across time and space.24 As modernisation created the notion of a national currency which diminished difference within national boundaries, then globalisation removes differences between national currencies, for example, with the birth of the credit card. The credit card is accepted around the world making it easier to spend money worldwide. The introduction of the Euro in many European countries in January 2002 is another example.25 Expert Systems are the result of scientific discoveries and technical knowledge which claim to be universal. They are not context dependent and therefore can establish social relations across time and space. An example of this is the current model of health care which is based on universal claims of science and dominates across the globe. ...read more.

The warring camps and nations of the world united against the common foe of global terrorism."42 Old rivalries of the US, such as with Moscow and Beijing are forgotten and a real cease-fire between Israel and the Palestinians is enforced. He pontificates that humanities common fear is now making new bonds and dissolving the boundaries of national and international politics creating the globalisation of politics in which states are moulded into transnational co-operative networks. He also shows how foreign and domestic policy, national security and international co-operation are now interlocked. Since 11th September, 'terrorist sleepers' have been identified in Hamburg, Germany, and many other places. Therefore German domestic policy is now an important part of US domestic and foreign policy. So are the domestic foreign, security and defence policies of France Pakistan, Great Britain, Russia and so on.43 There are very many arguments suggesting that the world is becoming as one. Other arguments I have not gone into are the growing awareness of the global environment and the ways people all over the world are trying to help, such as with the South American rainforest and the widespread starvation of Africa. Global tourism is also making us more aware of our world and the ease of travel to far away places makes the world seem as if it is smaller than when the first voyage of discovery crossed the Atlantic Ocean. The spread of the English language around the world and the films and television programmes seen by hundreds of millions of people in different countries also contribute. The world is also better connected both economically and politically with global financial markets and the World Trade Organisation, also the creation of international political communities such as the European Union and the United Nations make the world more integrated. However, we will not live in 'one world' until the problems of inequality between rich and poor are solved. Also until many aspects of difference are recognised and accepted, especially regarding religious difference as this is still a major cause of disagreement in the world today. ...read more.