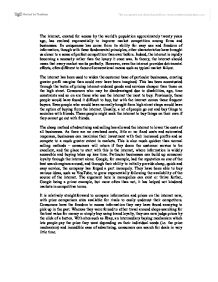 The internet, created for access by the world's population approximately twenty years ago, has evolved exponentially to improve market competition among firms and businesses. Its uniqueness has come from its ability for easy use and freedom of information, though with these fundamental principles, other characteristics have brought us closer to a sense of perfect competition than ever before. Indeed, the internet is rapidly becoming a necessity rather than the luxury it once was. In theory, the internet should mean that every market works perfectly. However, even the internet provides detrimental effects, often different to those of conventional means such as typical market failure. The internet has been used to widen the customer base of particular businesses, creating greater profit margins than could ever have been imagined. This has been accentuated through the tactic of pricing internet-ordered goods and services cheaper than those on the high street. ...read more.

Particular businesses can build up consumer loyalty through the internet alone. Google, for example, had the reputation as one of the best search engines around, and through their ability to initially provide cheap, quick and easy service, the company has forged a part monopoly. They have been able to buy various ideas, such as YouTube, to grow exponentially following the availability of the source of the internet. The argument here is monopolies can exist or thrive further, Google being a prime example, but more often than not, it has helped not hindered markets in competitive terms. It is relatively straightforward to compare information and prices on the internet now, with price comparison sites available for rivals to easily undercut their competitors. Consumers have the freedom to access information they may have found annoying to pick up in the past. Whereas they were forced to either travel around shops searching for the best value for money or simply buy using brand loyalty, they can now judge prices by the click of a button. ...read more.

International obstructions and hurdles do not exist either because of the internet. The internet has permitted all markets to become inter-related globally, meaning there is even more competition than there used to be. Businesses who cannot minimise their costs will be rapidly ousted from the market, a direct indication of the implications of globalisation in recent years. One quite notable damaging effect of the internet is security risks. Although the internet is a superb medium to freely exchange information, this opens up paths for those who do not play by the rules to steal data, credit card details and disrupt websites. Great care must be taken when buying from proxy sites, and often as there is little regulation and reams of terms and conditions people are reluctant to read (not the case with normal shops), it is relatively simple to fall for scams and not have an organisation such as the government to pick up the pieces subsequently. ...read more.

***
This essay lacks a proper structure. Points are made randomly. It would benefit from more analysis. There is little evidence of research to back up points e.g. what percentage of products are bought online? Points are made uncritically.