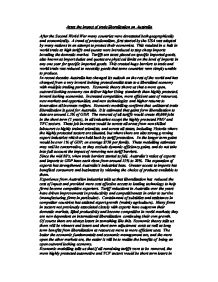 a***s the impact of trade liberalisation on Australia.

a***s the impact of trade liberalisation on Australia After the Second World War many countries were devastated both geographically and economically. A trend of protectionalism, first started by the USA was adopted by many nations in an attempt to protect their economies. This resulted in a halt in world trade as high tariffs and quotas were introduced to stop cheap imports invading the domestic market. Tariffs are taxes placed on specific imported goods, also known as import duties and quotas are physical limits on the level of imports in any one year for specific imported goods. This created huge barriers to trade and world trade was reduced to necessity goods that some countries were simply unable to produce. In recent decades Australia has changed its outlook on the rest of the world and has changed from a very inward looking protectionalist state to a liberalised economy with multiple trading partners. Economic theory shows us that a more open, outward looking economy can deliver higher living standards than highly protected, inward looking economies. Increased competition, more efficient uses of resources, new markets and opportunities, and new technologies and higher returns to innovation all increase welfare. Economic modelling confirms that unilateral trade liberalisation is good for Australia. It is estimated that gains form liberalisation to date are around 1.5% of GDP. The removal of all tariffs would create 40,000 jobs in the short term (2 years), in all industries except the highly protected PMV and TFC sectors. These job increases would be across all areas from non skilled labourers to highly trained scientists, and across all states, including Victoria where the highly protected sectors are situated, but where there are also strong growing export industries which are held back by tariff protection. In the longer term gains would be over 1% of GDP, on average $750 per family. These modelling estimates may well be conservative, as they exclude dynamic efficiency gains, and do not take into full account the impact of removing non tariff barriers. ...read more.

Breakthroughs such as the extension of shelf-life of a range of processed food products in Korea and addressing quarantine-related impediments for meat products in some European markets will deliver export gains. A recent specific example is the bilateral World Trade Organization (WTO) market access package with Taiwan, concluded in October 1996. It provides important gains in access for a wide range of agricultural and manufactured goods and services. The early access will contribute to additional exports in 1997 worth in excess of $30 million. Apart from early improved access for beef, motor vehicles and horticulture, once Taiwan becomes a member of the WTO, Australian exports will benefit from an average reduction of 40 per cent on both agricultural and manufactured products. In virtually every year of the postwar period, real growth in world merchandise trade has outpaced real growth in merchandise output. The ratio of goods and services exports to GDP (constant prices) has risen from around 16% in 1974 to 23% in 1995. Globally, average tariffs on manufactures have fallen from 40% in the 1940s when the General Agreement on Tariffs and Trade (GATT) was established, to around 4%. The proportion of Australia's exports of industrial products facing zero tariffs in developed countries will more than double, from 20 to 43 per cent, when the Uruguay Round cuts are fully implemented. Comparative international studies of competitiveness reveal that countries that rank consistently above Australia in competitiveness terms also tend to be the countries that have liberalised more than Australia. Interestingly, they also tend to be countries with lower unemployment (including Singapore, Hong Kong, US, New Zealand, UK). Australia is not alone in opening its markets Many people in austrlia feel uneasy as they feel they sould wait for other countries to reduce tariffs too, no one is ever willing to be the first as the losses are so large if it all goes wrong. ...read more.

are now outsourced to specialist services firms and counted as services jobs (eg in accounting, design, distribution, transport and training). The past decade has also seen improvements in the export performance of Australia's manufacturing sector. In 1985 manufactured products comprised less than 10 per cent of total goods and services exports. By 1995 this had grown to around 20 per cent. Australia has improved its competitiveness and increased exports in many industries not traditionally thought of as Australian exporters. Fastest growing exports over the past 5 years have included a range of elaborately transformed manufactures (ETMs) such as electricity distributing equipment (average annual trend growth since 1991-92 of 30.8 per cent); sporting goods (28.3 per cent); heating and cooling equipment (26.5 per cent) computer equipment and office machinery parts (25.1 per cent); industry-specific machinery (24.9 per cent); medicaments, including veterinary (22.4 per cent); medical instruments (20.4 per cent); telecommunications equipment (19.8 per cent); computers (19.6 per cent). Taking IT products as one of the abovementioned examples, while Australia is a net importer of information technology and telecommunications products, exports in this sector are growing very rapidly, having doubled between 1992 and 1996 to more than $1.8 billion, and there are significant further benefits for Australia in the Information Technology Agreement (ITA) in the WTO, which will create new employment opportunities for this fast-growing export industry. Reducing Australia's tariffs on basic business inputs such as information technology and telecommunications equipment, would also lower costs for Australian industry. Processed food products have also grown strongly such as milk and cream products (20.4 per cent); cheese (17.7 per cent); alcoholic beverages (14.1 per cent); cereal preparations (10.1 per cent). Some industries that many think Australia is uncompetitive in have actually displayed above average export growth (such as engines, other car parts and passenger motor vehicles), although these industries benefit from assistance that imposes costs on other industries. Last year (1996) automotive exports were over $2.3 billion, a five-fold increase over the level ten years ago. Key Trends in Australia's Trade ...read more.