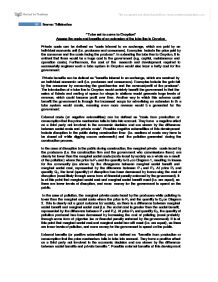 "Tube set to come to Croydon" Assess the costs and benefits of an extension of the tube line to Croydon Private costs can be defined as "costs internal to an exchange, which are paid by an individual economic unit (i.e. producers and consumers). Examples include the price paid by the consumer and the costs facing the producer". In extending the tube line to Croydon, it is evident that there would be a huge cost to the government (e.g. capital, maintenance and operation costs). Furthermore, the cost of the research and development required to successfully engineer such a tube system in Croydon would also incur a hefty cost for the government. Private benefits can be defined as "benefits internal to an exchange, which are received by an individual economic unit (i.e. producers and consumers). Examples include the gain felt by the consumer by consuming the good/service and the revenue/profit of the producer". The introduction of a tube line to Croydon would certainly benefit the government in that the sales of tickets and renting of space for shops in stations would generate huge levels of revenue, which could become profit over time. Another way in which this scheme could benefit the government is through the increased scope for advertising an extension in the tube system would create, meaning even more revenue would be generated for the government. ...read more.

The overall benefit of a reduction in pollution would also have to be measured using some sort of survey: it could be said that the larger the percentage of people who recognised and appreciated that there was a noticeable reduction in traffic, the greater the public benefit. There would certainly be a large increase in employment opportunities as a result of the development of a tube line in Croydon. Labour would be required for the construction, maintenance and operation of the tube line, meaning many people would need to be employed. The short term and long term effects of an increase in employment include more money being spent in the local area (by the new influx of workers), less government spending on benefits and more government revenue from taxes (if it is assumed the jobs spaces are filled by unemployed). However, it would be rather hard to measure the overall (not just monetary) benefit brought about by higher employment. In conclusion, the costs are outweighed by the benefits, as disruption would cease with the completion of the construction and pollution could be kept to the minimum with government intervention, and the reduction in congestion and higher employment would make Croydon as more pleasant and prosperous place to be. Therefore, the tube line should be extended to Croydon. ?? ?? ?? ?? ...read more.