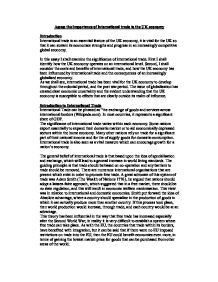 Assess the importance of international trade to the UK economy

The US remains the country with which the UK does the most trade, accounting for 15% of our exports and nearly 10% of our imports Importance of International Trade to UK Many of the goods and services produced in the UK will not be consumed by domestic households. They will be exported to satisfy the wants of consumers in foreign economies, this is an essential factor in UK international trade. International trade is an essential feature of the UK economy, In terms of import and export of goods and services, the UK has a strong service sector which is exported to the world, and in the balance of payments it surplus compared to goods balance, the UK has seen a rapid decline in domestic industry from the heydays of the empire. The British Empire was a significant factor in the UK's previous economic strengths, as the empire declined so did the economy of the UK, as well as a result of the First and Second World Wars. Nowadays the UK does not possess the political and economical influence that it had with the British Empire; it is still a major industrial country. The UK economy is dependent on the import of essential raw materials. Today the service sector is an increasingly important element of the UK economy as a result of the decline of the manufacturing sector. ...read more.

The surplus in services does not counterbalance the deficit in goods, however, so the balance of trade in goods and services has been deficit for some years now and is worsening. The other worrying thing regarding trade in goods and services is that the UK has a high degree of import penetration compared to its major competitors. The UK has a high Marginal Propensity to Import, which indicates that high economic relation in relation to other developed countries means that economic growth is driven by consumption which is also "sucking" in imports. The importance of international trade to economic performance has been strongly highlighted in new or endogenous growth theory. While neoclassical theory regards technical progress as an exogenous process, endogenous growth theory views commercially oriented innovation efforts that respond to economic incentives as a major engine of technological progress and productivity growth (Romer, 1990; Grossman and Helpman, 1991). Endogenous growth theory disputes that international trade allows a country to use a large variety of technologically advanced physical capital, which may enhance the productivity of its own resources. International trade promotes across-the-board learning in product design, facilitates the diffusion and imitation of foreign technologies and helps the creation of innovations. Conclusion We have seen the importance and influence of international trade on the UK economy. The level of importance varies in comparison to some other developed economies; in relation to the proportion of the UK's GDP that trade possesses. ...read more.

**** A well structured essay that covers many of the advantages of international trade. The writer seems less than confident with comparative advantage which is the most important point however. The title uses the trigger word 'assess' and the essay introduces some evaluative points by for instance pointing out about the trade deficits.