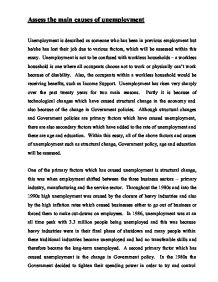 Assess the main causes of unemployment

Assess the main causes of unemployment Unemployment is described as someone who has been in previous employment but he/she has lost their job due to various factors, which will be assessed within this essay. Unemployment is not to be confused with workless households - a workless household is one where all occupants choose not to work or physically can't work because of disability. Also, the occupants within a workless household would be receiving benefits, such as Income Support. Unemployment has risen very sharply over the past twenty years for two main reasons. Partly it is because of technological changes which have caused structural change in the economy and also because of the change in Government policies. Although structural changes and Government policies are primary factors which have caused unemployment, there are also secondary factors which have added to the rate of unemployment and these are age and education. Within this essay, all of the above factors and causes of unemployment such as structural change, Government policy, age and education will be assessed. One of the primary factors which has caused unemployment is structural change, this was when employment shifted between the three business sectors - primary industry, manufacturing and the service sector. ...read more.

In 1996, only 1% of people returning to the workplace were earning �251-260 per week and a large 7.2% were only earning �51-60 per week and 5% were only earning a very low �0-20 per week, showing that sometimes staying unemployed can mean a larger income gained from benefits compared to the low rate of wages which could be received in employment. In 1979, 1.7 million people living in workless households had below half the average income and by 1994/95 this had raised to 2.8 million; this is a massive increase in twenty-five years of 1.1 million people living with a low standard of living with many experiencing some form of poverty. Secondary factors which have lead to unemployment are such things as age and education. Even though secondary factors are easier to control, they still cause problems. Firstly, within the age group of 16-21 year olds, they are more likely to be unemployed, unqualified and untrained if they were school leavers at sixteen; also, if they are employed they are more likely to earn less because there is no minimum wage for sixteen and seventeen year olds. Within this age group of 16-21 year olds who were school leavers at the age of sixteen; the young men are more ...read more.

There is also the case of being over-qualified within today's workplace. An example of this is between 1979 and 1996 employment for those with a degree had decreased by 1%, however, those with a higher education's employment rate had risen by 3%. This is because some employers only employ people who can do the job well, they do not want to employ the people who have degrees and could do the job very well because then they would have to pay them more! Therefore, to assess the main causes of unemployment the primary factors of structural changes within the industries and the changes in Government policies were explored as they have caused a large increase in the rate of unemployment because of the closure of traditional industries and inflation rates rising. Also, the secondary factors of age and education add to the rate of unemployment mainly because of the lack of education within the young age groups and then the older age groups and also the idea of being over-qualified for a job. Lastly, the rate of unemployment has increased because the higher amount of people living within workless households these days and who can find it harder to find long-term employment or even any type of employment with a high enough wage to help increase their standard of living and stop them from living with poverty. ...read more.