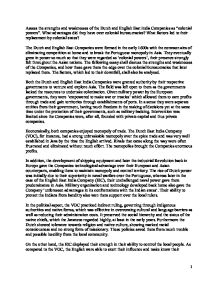 Assess the strengths and weaknesses of the Dutch and English East india Companies as &quot;colonial powers&quot; - What advantages did they have over colonial bureaucracies? What factors led to their replacement by colonial states?

Assess the strengths and weaknesses of the Dutch and English East india Companies as "colonial powers". What advantages did they have over colonial bureaucracies? What factors led to their replacement by colonial states? The Dutch and English East Companies were formed in the early 1600s with the common aim of eliminating competition at home and to break the Portuguese monopoly in Asia. They eventually grew in power so much so that they were regarded as 'colonial powers', their presence strongly felt throughout the Asian nations. The following essay shall discuss the strengths and weaknesses of the Companies, and how these gave them the edge over the colonial bureaucracies that later replaced them. The factors, which led to their downfall, shall also be analysed. Both the Dutch and English East India Companies were granted authority by their respective governments to venture and explore Asia. The field was left open to them as the governments lacked the resources to undertake colonization. Given military power by the European governments, they were 'empowered to make war or treaties' which allowed them to earn profits through trade and gain territories through establishments of ports. ...read more.

They were 'under the illusion that all was going well' when in fact they were unaware that the impact of their actions. The vast changes being implemented in India as well as British prejudice towards the Indians had aroused discontentment and nationalistic sentiments within the colony. However the British had always assumed a position of self-righteousness and blamelessness, which prevented them from responding accordingly to uprisings and checking their own misdoings. This naivety proved to be extremely costly to the Company as well as the British control over India. The EIC officials were also, like the VOC officials, very much focused on self-interest later during their rule. The Company's own political interests were allotted more importance than the welfare of the Indian states. Its attitude hardened towards the Indian states. In spite of the weaknesses, the Companies did have some advantages over the colonial bureaucracies that replaced them, which will be discussed below. Firstly, the main motive of the Companies was to trade, and the element of making profits remained important throughout their existence. Being private companies, they in fact had no obligations to take care of the administration of the colonies and could focus entirely on trade. ...read more.

There was also too much propagation of Christianity and interference from the English, which all led to the Indian Mutiny in 1857, after which British power in India never really recovered. The EIC was made the 'scapegoat of the whole business', and thought to be 'a symbol of monopoly, backwardness, and enemy of the Christian improvement of the land'. Abolition of the Company was deemed necessary, enabling the British to have a fresh start towards reconciliation with the Indians. In 1858, the Crown assumed all governmental responsibilities held by the Company that was later dissolved. hi conclusion, to a certain extent the Dutch and English India Companies were successful in their reign as 'colonial powers'. Their original policy founded on principles of 'trade than govern' and respect for the local community worked well and gave them advantage over the central government that took over them. However these eventually gave way to self-interests for individual and Company, without regard for the locals. This, together with circumstances not within control of the Companies, caused the downfall of the institutions. Yet one cannot deny the impact by the Companies during their existence, both to development and influence on Asia as a whole. 1 ...read more.