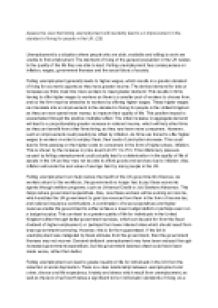 Assess the view that falling unemployment will inevitably lead to an improvement in the standard of living for people in the UK. (25)

ï»¿Assess the view that falling unemployment will inevitably lead to an improvement in the standard of living for people in the UK. (25) Unemployment is a situation where people who are able, available and willing to work are unable to find employment. The standard of living of the general population in the UK relates to the quality of the life they are able to lead. Falling unemployment has consequences on inflation, wages, government finances and the social fabric of society. Falling unemployment generally leads to higher wages, which results in a greater standard of living for economic agents as they have greater income. The derived demand for labour increases as firms must hire more workers to meet greater demand. This results in firms having to offer higher wages to workers as there is a smaller pool of workers to choose from, and so the firm must be attractive to workers by offering higher wages. ...read more.

Also, inflation will erode the real value of savings held by many people in the UK. Falling unemployment can help restore the health of the UK governmentâ€™s finances. As workers return to the workforce, the government no longer has to pay those economic agents through welfare programs, such as Universal Credit or Job Seekers Allowance. This helps reduce government expenditure. Also, now these workers will be earning an income, which enables the UK government to gain tax revenue from them in the form of income tax, and national insurance contributions. A combination of lower expenditure and higher revenue enable the government to either achieve a lower budget deficit or perhaps even run a budget surplus. This can lead to a greater quality of life for individuals in the United Kingdom either through better government services, which can be paid for from the fiscal dividend of higher employment, or perhaps from lower interest rates which should result from lower government borrowing. ...read more.

In conclusion, whilst falling unemployment probably will in most circumstances lead to an improvement in the quality of life for people in the United Kingdom, this relationship cannot be described as inevitable. Perhaps if unemployment were falling from quite a high level, say 10%, then this relationship could be described as inevitable. However, if unemployment is already quite close or at full employment, greater employment would just lead to inflationary pressure as the economy would be operating with a positive output gap. Also, standard of living is quite a vague term. Greater wealth, which generally results from employment, perhaps would not translate into an improvement in the standard of living if the work were not fulfilling for the employee. Stress could lead to greater mental health issues, which reduces the quality of life of people and if we are relating standard of living to quality of life then work could not lead to an improvement in the standard of living. Inflationary impact of greater employment- ...read more.