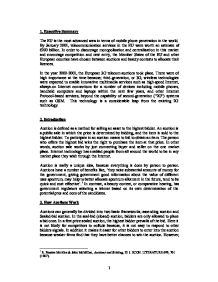 Auction is defined as a method for selling an asset to the highest bidder.

1. Executive Summary The EU is the most advanced area in terms of mobile phone penetration in the world. By January 2001, telecommunication services in the EU were worth an estimate of �200 billion. In order to discourage monopolisation and centralisation in this market and encourage competition and new entry, the Member States of the EU and other European counties have chosen between auctions and beauty contests to allocate their licences. In the year 2000-2001, the European 3G telecom auctions took place. There were of high importance at the time because; third-generation, or 3G, wireless technologies were expected to enable innovative multimedia services such as high-speed Internet, always-on Internet connections for a number of devices including mobile phones, handheld computers and laptops within the next few years, and other Internet Protocol-based services, beyond the capability of second-generation ("2G") systems such as GSM. This technology is a considerable leap from the existing 2G technology. 2. Introduction Auction is defined as a method for selling an asset to the highest bidder. An auction is a public sale in which the price is determined by bidding, and the item is sold to the highest bidder. To participate in an auction means to bid to obtain an item. The person who offers the highest bid wins the right to purchase the item at that price. In other words, auction sale works by just connecting buyer and seller on the one market place. Internet technology has enabled people from all around the world to be in any market place they wish through the Internet. ...read more.

Leading the auction to take place with only four bidders for four Licences. The government postponed the auction for one month hoping to be able to change the rules, but the bidders argued that the government is legally obliged to stick to the original rules. 'So the bidders had just to pay the reverse price one-thirtieth per capita of the UK and German prices, and one fiftieth of what the government had once hoped for. 4.5 Conclusion & Recommendations From the above we can see what Kemmerer meant by "flawed methods of allocation". The Netherlands, Italy and, Switzerland had entry concerns, thus, they would have done better if they used a sealed-bid auction. Because, 'sealed-bid auction provides no opportunity for either signalling or punishment to support collusion. Furthermore, entry is promoted because a weaker bidder knows he has a better chance of victory'6. Nevertheless, that dose not mean that, the sealed bid auction is the best for all situations. Sealed bid auctions also has its disadvantages 'the biggest disadvantage of the sealed-bid auction is the flipside of one of its advantages- because it allows bidders with lower values to sometimes beat opponents with higher values (and so encourages entry) it is more likely to lead to inefficient outcomes than the ascending auction'.7 From the above we can see that there is no auction design that can be suitable for all situations. 'So an auction design must be tailored both to its environment, and to the designer's objective.8 Auction design has a significant effect on the outcome. ...read more.

Preston McAfee & John McMillan, Auctions and Bidding, 25 J. ECON. LITERATURE 699, 701 (1987). 2 An ascending auction is the kind of auction typically used to sell an art object or antique. The price starts low and competing bidders raise the price until nobody is prepared to bid ant higher, and the final bidder wins the prize at the final price he bid. Mobile-phone licenses are sold in simultaneous ascending auctions which much the same except that several licences are sold at the same time with the price rising on each of them independently, and none of the licences is finally sold until no-one wishes to bid again on any of them. 3 Richard H. Thaler, The Winner's Curse: Paradoxes And Anomalies Of Economic Life (1992). 4 3G Country Information, FIN. TIMES, Aug.15,2001. 5 Peter Crampton, Spectrum Auctions, in HANDBOOK OF TELECOM ECON.1 (Martin Cave et al, eds, forthcoming 2001) 6 In a first-price sealed-bid auction every bidder makes a single "best-and-final" bid, and the winner pays the price he bid. 7 Cai, 1997; Myerson and Satterthwaite, 1983; Cramton, Gibbons and Klemperer, 1987). 8 Binmore and Klemperer, 2000; Wolfstetter, 2001. 9 Allowing resale is not a perfect substitute for an efficient intial allocation, because resale is itself generally inefficient. See Myerson and Satterthwaite (1983) and Cramton, Gibbons, and Klemperer (1987). 10 They could not do so actively because it violates current EU rules. 11 BT: We Blew $14 Billion, CNNfn, Feb. 19, 2001, available at http://www.cnnfn.cnn.com/2001/02/19/europe/British_telecom 12 Williams, M. (2002), 3G Auctions Represented Heavy TaxOn Tececom, available from http://www.pcworldmalta.com/news/2002/nov/151.htm. 13 Klemper,P. (2002), The Wrong Culprit For Telecom Trouble, Financial Times, Page 21. 1 ...read more.