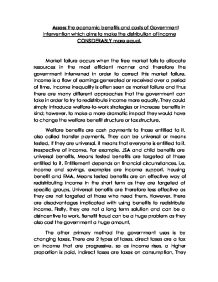 benefits and costs of Government Intervention which aims to make the distribution of income CONSIDERABLY more equal.

Assess the economic benefits and costs of Government Intervention which aims to make the distribution of income CONSIDERABLY more equal. Market failure occurs when the free market fails to allocate resources in the most efficient manner and therefore the government intervened in order to correct this market failure. Income is a flow of earnings generated or received over a period of time. Income inequality is often seen as market failure and thus there are many different approaches that the government can take in order to try to redistribute income more equally. They could simply introduce welfare-to-work strategies or increase benefits in kind; however, to make a more dramatic impact they would have to change the welfare benefit structure or tax structure. Welfare benefits are cash payments to those entitled to it, also called transfer payments. ...read more.

Indirect taxes are taxes on consumption. They are regressive, so as income falls, a higher proportion is paid, which is deemed to be unfair. In order to narrow income inequality, the government could raise taxes for higher income earners. By raising taxes, the government is able to redistribute income by spending the money on education, training and buildings etc that people on lower incomes can use - it is redistributed in an indirect way. However this may have the effect of people working less due to the back-bending labour supply curve as shown below. The supply curve above shows the optimum level of taxation with the maximum level of hours worked. If the level of tax is risen, then output will fall, and also if the level of taxation falls, due to the theory of the substitution effect. ...read more.

Therefore the most significant benefit of increasing welfare benefits to narrow income distribution is that in the short term, it will be effective, however the greatest disadvantage is that in the long term it will not be effective as is likely to act as a disincentive to work. The greatest advantage of changing the UK tax structure to narrow income distribution is that it is a long term solution. By lowering income tax to the lowest band of income earners will significantly increase their income and thus narrow distribution. However, by lowering income tax, the government may have to raise indirect, regressive taxes, which will not help the lower income earners, taking up more of their disposable income. Having weighed up the benefits and costs of both methods, a change of the tax structure in the UK is the best long term solution to equalise the distribution of income in the UK with the least amount of costs to society. ...read more.