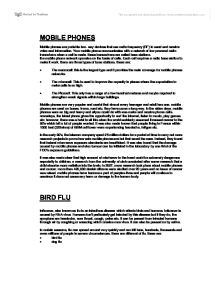 MOBILE PHONES Mobile phones are portable two- way devices that use radio frequency (RF) to send and receive voice and information. Your mobile phone communicates with a network of low powered radio tranceivers when a call is made. these transceivers are called base stations. the mobile phone network operates on the basis of cells. Each cell requires a radio base station to make it work. there are three types of base stations. these are: * The macrocell: this is the largest type and it provides the main coverage for mobile phones networks. * The microcell: This is used to improve the capacity in places where the expectation to make calls is so high. * The Picocell: This only has a range of a few hundred meteres and maybe required to strengthen weak signals within large buildings. Mobile phones are very popular and useful that almost every teenager and adult has one. mobile phones are used on buses, trams, road etc. ...read more.

a research from the university of utah concluded after some research that a child absorbs more radiation into the brain. in 2007, more research took place about mobile phones and cancer. more than 420,000 danish citizens were studied over 20 years and no issue of cancer was raised. mobile phones have become a part of peoples lives and people will continue to usesince it does not cause any harm or damage to the human body. BIRD FLU Influenza, also known as flu is an infectious disease which affects birds and humans. influenza is caused by RNA virus. Humans don't particularly get infected by this disease but if they do, the symptons are headache, sore throat, cough, pains etc. it can be passed from infected humans through air by coughing or sneezing which creates moe virus. it can also be passed on by saliva. in certain seasons, flu can spread around very quickly and can kill tens, hundreds, thousands and even millions of people in severe circumstances. ...read more.

H5N1 claimed its first human victim in Turkey. more reports were made concerning the fact that more people were infected by this deadly virus. in 2007, scientists working in Switzerland, Vietnam and the United States highlighted a bird flu antibody. Most people are worried and concerened about bird flu but others dont take it seriously such as people living in Turkey and Asia. there was some few outbreaks in Britain but only the people close to the infected birds were infected. the birds that were infected were destroyed as soon as they were discovered. brits are more relieved because theres less or even no outbreaks of bird flu and also bird flu cant be passed from human to human. EVALUATION Several information and researches have taken place to warn human that bird flu is not a joke but real. ideas are still being put together to find measures to cure it and also how to bring it under control. tens of people have already been infected with this disease and hopefully no one gets it as warning measures and information have been given to warn everyone of this deadly disease. ...read more.