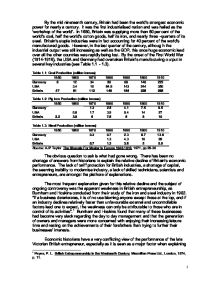 By the mid nineteenth century, Britain had been the world's strongest economic power for nearly a century. It was the first industrialised nation and was hailed as the 'workshop of the world'.

Lars G. Sandberg went even further in his defence of the entrepreneur. In 1969, Sandberg published his article, 'American Rings and English Mules: The Role of Economic Rationality', in the Quarterly Journal of Economics. Whereas, Wilson had used newer industries to counter the failure hypothesis, Sandberg went directly against the Aldcroft and Landes view using the cotton industry as an example of entrepreneurial efficiency. In the slow adoption of the ring spindle over the much slower and less efficient spinning mules, Sandberg concluded that this was not indicative of 'technological conservatism', but was instead the 'rational' response of British industrialists to the various factor costs, and the availability of a skilled workforce making the innovation unnecessary at that time.18 This was still the case in the 1930s when almost seventy-five percent of Lancashire's cotton yarn was still being produced on mules.19 What was so unique about Sandberg's theory, was not so much his results, but more the method he used to get them. His undertaking of a formal cost-benefit analysis, was the start of a wave of quantitative assessments, the most famous of these being the work of Donald N. McCloskey. Not only does McCloskey feel he has redeemed the performance of the British entrepreneur, but in his article 'Did Victorian Britain Fail?', published in 1970, McCloskey also arrived at a favourable conclusion of Britain's economic performance in the 1870-1914 period. Unlike the pessimistic image portrayed in the findings of Landes and Aldcroft, McCloskey views the late Victorian period as "a picture of an economy not stagnating but growing as rapidly as permitted by the growth of its resources and the effective exploitation of the available technology".20 McCloskey argued that there was no break in trend in British industrial production and real product growth, especially on a cyclical basis, till 1913. He reached this conclusion by measuring the aggregate output of the economy as a whole, and then he gauged how efficiently Britain utilised the available techniques and resources. ...read more.

we continue to accept generalised explanations about characteristics which, in so far as they amounted to 'short-comings' or even 'failure', were so variously distributed?".37 The work of Landes and Aldcroft, stressed the fall in entrepreneurial performance, offering examples, showing what they believe implicitly to be illustrative of poor industrial leadership and management. The main focus of their theories, being the poor response of British businessmen in adopting the latest techniques and machinery. However, by using the same statistical indicators, historians such as Charles Wilson, S.B. Saul were quick to dispute the claims of Landes and Aldcroft, by showing examples of industries that were more productive and profitable than their American and German counterparts. The quantitative assessments of McCloskey, Sandberg and Floud have opened the debate up to further controversial discussion. Although there work is of equal and perhaps greater merit than the early hypothesis of entrepreneurial failure, it is by no way fully conclusive. Ultimately any judgement made on the performance of British entrepreneurs or on the decline of British industrial performance is dependent upon the historian's choice of performance indicators. Entrepreneurial activity as this essay has shown, is not a factor in itself to explain the relative decline of the economy or the comparatively poor performance of British industrial production. It is difficult to ascertain whether an entrepreneur's aims and goals are going to be those that prove to be the best thing for the national economy. There clearly was not a typical Victorian entrepreneur, some were disappointing, particularly in the older staple industries, but they were not characteristic of the period as a whole. Successes could also be found in the newer industries and within the service industry, but again, this is not characteristic either. There are also regional disparities where cases of entrepreneurial endeavour and failure can be seen. At this moment in time there is simply not enough statistical evidence or enough detailed case studies to either be able to condemn the late Victorian and Edwardian entrepreneur, or redeem him. ...read more.