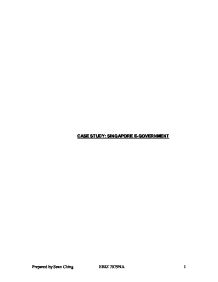 CASE STUDY: SINGAPORE E-GOVERNMENT Table of Contents Page Executive Summary 1 1.0 Overview 5 2.0 Model of Singapore e-Government Business 7 3.0 Methodology 3 4.0 Key Findings and Interpretation 4 .1 The Cognitive Style Instrument 4 4.2 Personal Assessment of Management Skills 6 (Personal & Associates' Version) .2 The Locus of Control Scale 10 5.0 Summary of Findings and Recommendations 12 6.0 Conclusion 16 Appendix References Executive Summary On the last twenty years, Singapore has made tremendous strides in exploiting IT in its bid to remain competitive in challenging regional and global arenas. Led by the government, the nation prides itself as a reference model for showcasing how technology can be successfully assimilated into our daily lives of the population. The progressive and meticulously crafted national ICT programs have established a strong foundation as Singapore leaps into a new frontier while embracing technologies. The Journey has not been without its shares of bumps and potholes. Among the successes were also a number of failed experiments and initiatives. The failures in some of these projects did provide valuable feedback and were instrumental in shaping the design and implementation of subsequent e-government initiatives. The write-out is divided into 3 parts: * The first part, offers the understanding of what Singapore e-Government is. An overview of Singapore e-Government journey is briefly highlighted. * The second part focus on the overall vision, business model, strategies, as well as on the key challenges and lessons that was learned. * The Third and final part, the focus on critical success factor of Singapore e-government now and future. 1.Overview The action plans for Singapore e-Government have evolved in tandem with each National IT Plan to bring about exciting changes to the way Singapore Government works, interacts and serves the public. Singapore's e-Government journey begun with the Civil Service Computerization Program (CSCP) in the early 80's. The CSCP was conceived with a clear direction of turning the Singapore Government into a world-class exploiter of IT. ...read more.

* There was very early recognition that IT would be needed to leverage Singapore's intellectual capital in order to move into the ranks of developed nations. A concerted effort to harness computing power begun in the early 1980s with the government taking the lead. * There is visible and committed leadership within both political and administrative arms of government. Weakness * As Singapore e-government is reaching perpetual maturity(base on Accenture report (1)). The Political leaders need to define and communicate the drivers for e-government. Some of the drivers may be: responding to shrinking public service workforce (i.e. replaced by e-gov); high expectations of citizens, convenient and responsive public services. Opportunities * In lieu of Singapore Strong e-government, which almost all feasible services has been put on-line, the next step is to promote them. Some of the incentives of getting customers to change their behavior from traditional mode to online world include differentiating pricing, faster turnaround time and high quality e-services. Threats * With the new capabilities and possibilities presented by e-government solutions, discontinuities may arise within existing policies, jobs and skills. * The resistance of minority whom will not use e-services (i.e. IT illiterate) * The interest of conflicts taking place in transforming e-government between different departments and agencies can only be coordinated at the highest level. The resistance of changes brought by e-government transformation has to be overcome by top management. 4.2 Social Aspects Strength: * IT literacy and education plays a large important role in public attuning to e-services. Large part Singapore population is IT literate. * There is also high awareness and acceptance of electronic gadgets and services among the Singapore population. * Singapore government actively promotes e-lifestyle through promotions such as advertising, lucky draws and contest. Weakness * Not a lot of people exploits this "advantage" using the e-government portals Opportunities * E-government is a useful tool for government to disseminate and collect information to the citizen quickly without mammoth effort. ...read more.

This well designed and reliable infrastructure is critical to support the e-government vision for the future. ICT education programs must go beyond learning about systems and applications to harnessing ICT to improve work processes and services delivery, and to developing policies more relevant to in the new economy. 8 Conclusion in the early years, Singapore government administration may have though that e-government was a fashionable to do, and went ahead with their initiative base on that basis. After all, most lead countries (i.e. USA, CANADA) were going in these directions. After several years of massive investments in time and money, most (i.e.Citizens) have a better appreciation of the value of their e-government undertakings. How Singapore e-Government will evolve from depends largely on how the new government (i.e. Mr Lee Hsien Long and his cabinets) leadership takes on the initiatives that were examined. A base scenario would see that government employing e-Government primarily at operational level, in order to benefit from productivity gains. The practice will largely be unchanged, just made some more efficient. It is certainly a sound step for any administration. Standing still while others are progressing would be to fall behind. This strategy however may not fully leverage on the other possibilities that Singapore e-Government can offer. Another scenario might be to use Singapore e-Government to focus on enhancing the relationship between governments and constituents. Depending on the degree to which approaches like CRM is adopted, and pervasiveness of e-government (through mobile and wireless technologies perhaps), this can lead to significant changes in G2C, G2B or even G2E. An extreme scenario would see e-Democracy taken to such an extent that the government administration becomes bogged down by citizen participation at every steps, with e-voting on all significant issues. By definitions, that would be total democracy. Singapore e-Government, with all its ranging possibilities, is simply a tool. It is one of the many tools that could help bring about elusive state we call "good government". At the end of the day, it is up to the nation's leader and public administrators to decide how they can make use of the tool. 9. ...read more.