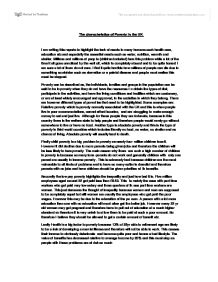 The characteristics of Poverty in the UK

I am writing this reports to highlight the lack of needs to many humans such health care, education etc and especially the essential needs such as water, nutrition, warmth and shelter. Millions and millions of people (children included) face this problem while a lot of the time it all goes unnoticed by the well off, which is completely absurd and to be quite honest I am sure a lot of them do not care. I find it quite horrible how millions of people can die due to something so sinister such as starvation or a painful disease and people must realise this must be stopped.

Poverty can be described as, the individuals, families and groups in the population can be said to be in poverty when they do not have the resources to obtain the types of diet, participate in the activities, and have the living conditions and facilities which are customary, or are at least widely encouraged and approved, in the societies in which they belong. There are however different types of poverties that need to be highlighted. Some examples are: Relative poverty which is poverty normally associated with the UK and this is when people live in poor accommodations, cannot afford luxuries, and are struggling to make enough money to eat and just live. Although for these people they are fortunate, because in this country there is the welfare state to help people and therefore people would rarely go without somewhere to live or have no food. Another type is absolute poverty and this is the type of poverty in third world countries which includes literally no food, no water, no shelter and no chance of living. Absolute poverty will usually lead to death.

Firstly child poverty is a big problem in poverty as nearly four million children face it. However it did decline due to more parents being given jobs and therefore the children will be less likely to face poverty. The main reason why there are such a high number of children in poverty is because so many lone-parents do not work and generally children with only one parent are usually in income poverty. This is extremely bad because children are the most vulnerable to all kinds of problems and to have so many suffer is dreadful and therefore parents with no jobs and have children should be given priorities with benefits.

Secondly the low pay poverty highlights the inequality and just how bad it is. Five million employees aged around 22 get paid less than £6.50. This is mainly the case with part time workers who get paid very low salary and three quarters of these part time workers are women. This just demeans the thought of inequality because women and men are supposed to be completely equal but still women are usually the employees who get paid the poor wages. However this may be due to the education of the person. A person with a lot more education than one with no education will most often get the better job. However many 22 yr old women may get pregnant and therefore have to pull out of education at a much higher standard so therefore it is very unfair to allow them to be paid at such a poor amount. So therefore I believe they should be allowed to get a certain amount of benefit etc.

Lastly Health is a big factor to poverty because 13% of 25yr olds to retirement age are likely to be a risk of developing a mental illness and therefore will not be able to work. This causes their income to obviously deteriorate and become quite poor and hence a bad lifestyle. The value of benefits has decreased relative to average income by 20% and this must stop as people with these problems are at risk so much

I am the think tank and my aim is to conduct research in a proposal to alleviate poverty.

If the minimum wage was raised to £7.00 then obviously this would help the lower class people to earn more money and would mean people with part times jobs who usually get paid very poorly to become paid a lot more and therefore would be very useful. Also it would mainly affect many of the female workers as a lot more females then males and therefore for many of the single mothers it will mean they will be able to receive more money and have a better lifestyle. This however will not affect pensioners and the unemployed as they are not working and so will not receive any benefits from it and they will most likely still remain in poverty which is not good as they are usually the people in poverty in the first place, but then this may just give the unemployed people the incentive to actually try and go out and find a job.

Raising the state pension would mainly affect the older households as they will be the pensioners. It will allow them to elude poverty as they will have means to have a better lifestyle. However for everyone else this will not make a difference for them well not for at least a few years or even decades so trying to tackle poverty by this method would be not very appropriate.

Raising child benefits is quite a decent method because many of the kids that are in poverty are in it due to their parents being poor, so helping out the parents with children will cause poverty to drop dramatically. This will also be extremely beneficial to single parents as it allows them to have more money to help both of them to survive. Also as kids are the future we need to make sure that we can help out as many as possible that are in poverty and if we can help those that are not then that is another plus because it will mean they will have a much better lifestyle and therefore it may lead to helping the youth of the societies to become well educated and so it will lead to our economy continuing to be strong and prosper. This however will not affect the adults without kids including the pensioners. The adults without kids is a very large percent and therefore increasing the child benefits will not be as beneficial as first glance made it seem and so would not alleviate poverty as much as I would like.

Raising the job seekers allowance by an average of £50 would help decrease poverty because it will definitely create a huge incentive for the unemployed to actually start looking for jobs and getting the money. It will mean eventually the people will find jobs and so in the long term the benefits being given to these people will go down and so can be used on others. However a problem with this is that many people may see this as an opportunity just to get extra money and may just continue to stay on the job seekers allowance while pretending to find a job however may actually never accept a if they are offered one. In addition this is very limited to the unemployed people and with poverty in so many other categories of people, such as the pensioners, part time workers earning minimum wage and the women on maternity leave or having to care for their baby and so is not really an effective method.

By providing 24 hour nursery care and crèche facilities this once again is only going to help a limited group of people which are the parents of young kids which is definitely a small proportion of the unemployed and part time workers. This obviously will mean that this group of people will find it easier to get out of poverty by leaving their kids in good hands with the nursery care and therefore going out to look for jobs and so will be at least getting job seekers allowance if they do not get the job they want. However, like I have said it is not very conventional and will not be a practical method.

Another method is that we can target the unemployed and virtually force them to work which would be by cutting all benefits to workers able to work and therefore if they do not find work then they would literally have no income. I guess this would make them find a job, but this is incredibly harsh as many of these people will not be able to find jobs due to the current situation of there being very limited jobs and we are trying to alleviate poverty this method would just make more poverty. I believe this would be a very poor method to use.

In conclusion I believe that all the methods I have talked about do have their positives and negatives but really they will not work very well by their selves and so will need to be used together alongside other proposals.