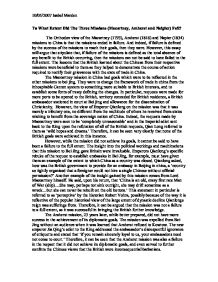 CHINA: To What Extent Did The Three Missions (Macartney, Amherst and Naipier) Fail?

To What Extent Did The Three Missions (Macartney, Amherst and Naipier) Fail? The Orthodox view of the Macartney (1793), Amherst (1816) and Napier (1834) missions to China is that the missions ended in failure. And indeed, if failure is defined by the success of the missions to reach their goals, then they were. However, this essay will argue that stipulate that, if failure of the missions is defined as the total absence of any benefit to the British occurring, then the missions can not be said to have failed to the full extent. The lessons that the British learned about the Chinese from their respective missions were beneficial to them as they helped to demonstrate the course of action required to rectify their grievances with the state of trade in China. The Maccartney mission in China had goals which were to be reflected in the other missions to bei jing. They were to change the framework of trade in china from the inhospitable Canton system to something more suitable to British interests, and to establish some form of treaty defining the changes. ...read more.

Therefore, it can be argued that the mission was not a failure to a full extent, as it was successful in bringing the British further knowledge. The Amherst mission, 23 years later, while better prepared, did not have more success in the achievement of its diplomatic goals. The mission was expelled from Bei Jing without an audience when it was learned that Amherst refused to Kowtow. The new emperor Jia Qing's edict to the King addressed the ambassador's disrespectful ignorance of ettiquette and stated that 'if you remain sincerely loyal to us, your ambassadors need not come to court.' Therefore, it can be seen that the Amherst mission was also a failure in the respect that it did not achieve its diplomatic goals, and even served to further confirm the Chinese views that the British were inconsequential barbarians. However, as with the Macartney mission, the Amherst mission was not a failure to a full extent. The noted historian Robert Vohra states that while to the Chinese the envoy was somewhat inconsequential, in England 'more and more people were coming to the conclusion that since all attempts to establish fair relations with China only resulted in insults to Britain, China would have to be dealt with in a more forceful fashion.' ...read more.

They were misled and deluded (understandably so) into thinking that their world view was correct and that they could persist in treating foreign countries as tributary state, and the foreigners as useless barbarians. This precedent can be seen as beneficial to the British as it meant that the Chinese were totally unprepared for their successful performance in the first opium war, which allowed them to sign the treaty of Nanking. In conclusion, the extent to which the missions of macartney, Amherst and Naipier in china failed cannot be judged simply by their lack of short term gain. The long term effects the missions had upon the British views of China must be taken into account. If these two different aspects are looked at, it can be seen that the missions were not failures to the full extent, because of the invaluable knowledge they brought to the British, and also because of the precedent they set to the Chinese (which encouraged them to underestimate the strength of the British desires for trade). ?? ?? ?? ?? 10/05/2007 Isabel Marden ...read more.