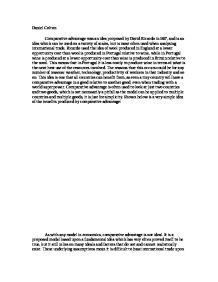 Comment critically on comparative advantage as a basis for international trade.

Daniel Colton Comparative advantage was an idea proposed by David Ricardo in 1817, and is an idea which can be used on a variety of scales, but is most often used when analysing international trade. Ricardo used the idea of wool produced in England at a lower opportunity cost than wool is produced in Portugal relative to wine, while in Portugal wine is produced at a lower opportunity cost than wine is produced in Britain relative to the wool. This means that in Portugal it is less costly to produce wine in terms of what is the next best use of the resources involved. The reasons that this occurs could be for any number of reasons: weather, technology, productivity of workers in that industry and so on. This idea is one that all countries can benefit from, as even a tiny country will have a comparative advantage in a good relative to another good, even when trading with a world superpower. Comparative advantage is often used to look at just two countries and two goods, which is not necessarily a pitfall as the model can be applied to multiple countries and multiple goods, it is just for simplicity. ...read more.

The government would have to spend a huge amount on supply side policies such as very efficient schemes of education or perhaps low taxation (Thatcherite) to be able to transfer skills that quickly, and shift the long run aggregate supply curve to the right, thus reducing unemployment: Because the government realises just how unlikely and difficult it is to transfer resources, it actively discourages the failure of an industry, as shown by the EU's enormous subsidies of the farmers in this country, most notably the Common Agricultural Policy. It is therefore acting against the theory of comparative advantage, as this would dictate that the farmers move into the service sector, where Britain is very productive. This shows how politics has a great affect on trade once the industry has been established, though comparative advantage may well have dictated what industries were originally started and how they grew, even if politics has a greater effect today. The fact that politics makes a big difference in the effect of comparative advantage demonstrates another shortcoming of the theory. ...read more.

It is at no stage a random process as to what goods are traded, and there are good reasons for why bananas aren't grown in England and sheep aren't reared in the West Indies. The productivity of a country in producing a good dictates what it will trade, and a country that is very inefficient in producing a good will move onto something to which it is more suited. There are of course cases where this is overridden by the factors mentioned, but ultimately comparative advantage theory does form a 'basis' as the title suggests, to almost all international trade. For the trade to occur, the terms of trade are laid out, which is simplified to compromising between the opportunity cost ratios of the two countries. Once again, this is not exactly how it works, as politics and economics merge to create something slightly different, but it is highly likely to be something close to what comparative advantage suggests it should be. It is inevitable that the model does not fit the real world, but there is not a single economic theory that can be applied directly to an economy with no assumptions being made. ...read more.