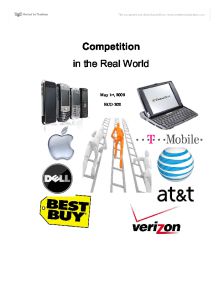 Competition in the Real World

Competition in the Real World May 1st, 2009 ECO-202 When shopping for netbooks or laptops, consumers test out their options from familiar companies such as Dell, HP, Apple, Microsoft, and Compaq etc. But soon new options will become available to the buyers. As they hunt for the perfect PC for them, they will now see familiar names but from another market. Wireless Carriers, like AT&T, Verizon, and T-Mobile, are joining the PC market. One of the first examples of their brainstorming idea became apparent on April 1st, when AT&T started selling laptop computers for a small amount of 50 dollars, to people who signed up for a 2-year agreement to get at-home and mobile broadband services. Although they only made this deal available to consumers in Philadelphia and Atlanta, they were very satisfied with the results and plan to make this available nationwide. In addition to AT&T, T-mobile has already merged into the PC market in Western Europe. Since last fall they have began selling netbooks; and wireless companies there already account for 25% of all small laptops sold there. ...read more.

In a way, PC makers will then enter the wireless market as well. Due to the quicker and increase of netbook sales, the "PC industry overall gets pulled into this downward spiral of lower average selling prices and margins" according to Roger Kay. In addition to a decrease in demand for more expensive computers, the demand for smartphones' demand will also decrease. Consumers will have more options such as the netbooks or the MIDs that were previously mentioned. MIDs may be used as a superior substitute over a smartphone, because of its higher battery life, larger screens, all for about the same price as a smartphone. In the future, this could mean diminishing marginal profits for many industries and companies. Furthermore, electronic retailers, like Best Buy for example, will soon realize they have competition. The competition arises from wireless carriers dropping upfront costs by several hundreds of dollars, in exchange for an economic profit. This may cause Best Buy or other retailers to drop their prices until they reach the bottom line price. Even then wireless carriers will still have the upper hand because of the services they can provide and the network they have already gained. ...read more.

Not only do firms have to produce the next superior product, they also have to come up with the next best economical deal for the bargain hungry consumers. Especially during a recession, consumers are less willing to spend their hard earned money on luxuries. Therefore it is important for companies to come up with the perfect cost to attract consumers, without procuring an economic loss. To do so, many firms are going to provide bundle packages. For example, AT&T has already offered discounted netbooks for consumers who sign up for the sixty-dollar a month bundle, including at-home Internet access and on-the-go broadband service. They also provide another deal in which they sell an Acer netbook for only a hundred dollars, when its usual asking price from retailers is 300 dollars. Understanding this story is important for consumers because they should not have to give up luxuries completely during these less thriving economical years. Consumers should still be able to indulge on products they crave, without having to sacrifice too much of an opportunity cost. Previously, consumers may have felt guilty for spending such large amounts of their disposable income on luxuries. However, they should finish reading this article optimistic towards investing in a netbook, especially through a wireless carrier. ...read more.