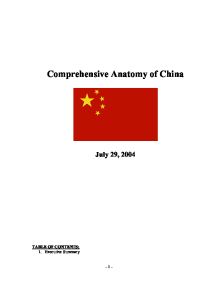 Comprehensive Anatomy of China July 29, 2004 TABLE OF CONTENTS: 1. Executive Summary 2. Geography 3. Key Historical Events 4. Culture a. Population Distribution b. Ethnic Groups c. Language d. Religion & Philosophy e. Education 5. Government a. Constitutional Framework b. Legislative Branch c. Executive Branch d. Judicial Branch e. Local Government f. Political System g. Defense 6. Economy a. Labor b. Banking System & Monetary Policy c. Fiscal Policy & Taxation System d. Agriculture e. Manufacturing & Industry f. Services g. Trends and Outlook 7. Trade a. Regulations and Standards b. Tariffs & Value Added Tax c. Imports & Exports d. Foreign Investment EXECUITIVE SUMMARY China is a country rich in culture, people, and natural resources. Throughout its long history, China has seen many transformations in its territory, leadership, religion, and philosophy. Over the last half century, many changes have affected China for the better when considered in aggregate. These changes have strengthened its foreign relations, economy, and outlook for the next century although China remains a poor country by world standards. When reviewing China's recent history there are three periods of significance that should be considered: the rise of communism and the establishment of the People's Republic of China in 1949, the modernization movement led by Deng Xiaoping in 1978, and in 2001 China's accession into the WTO. The rise of communism brought forth stability and moderate growth to the country, thereby fulfilling the Chinese people's basic needs. Under Deng Xiaoping, the country's economy began to grow by opening up its doors to foreign investment and trade. By the late 1990's China's economy had become much more liberal through the passage of reforms that changed China from a centrally planned to a socialist market economy. China's accession into the WTO in 2001 marked the next great step for China towards becoming further integrated into the world economy, which should ultimately lead to a better lifestyle for the Chinese people. ...read more.

Since the central governments decisions and changes in direction must be adhered to by the lower levels, the local organs are in essence extensions of the central government acting within the direct control of a unified leadership. Local Government There are 3 major governmental layers below the central government that constitute China's local government. The first tier under the central government has 5 autonomous regions, 4 autonomous municipalities, 2 Special Autonomous Regions and 22 provinces. The 5 autonomous regions are Guangxi Zhuang, Inner Mongolia, Ningxia Hui, Tibet and Xinjiang Uygur. The 4 autonomous municipalities include Beijing, Chongqing, Shanghai, and Tianjin. The 2 SARs are Macao and Hong Kong. Anhui, Fujian, Gansu, Guangdong, Guizhou, Hainan, Hebei, Heilongjiang, Henan, Hubei, Hunan, Jiangsu, Jiangxi, Jilin, Liaoning, Qinghai, Shaanxi, Shandong, Shanxi, Sichuan, Yunnan, and Zhejiang are the 22 provinces. China considers Taiwan to be its 23 province. Since Taiwan is a rouge province governed by the party that lost the civil war in 1949 to the Communist, it will not be considered in this comprehensive analysis of China. The following figure illustrates the locations of these provinces, regions, etc. The second tier of the administrative levels is made up of prefectures, municipalities, and counties. Rural townships, municipal subdivisions and administrative towns constitute the lowest level under the central government. Grassroots organs such as resident's committees within cities or villages in rural region are common. Although these organs are below the state's structure, they do serve important governmental functions, e.g. overseeing population planning and collecting taxes. Political System The Chinese Communist Party, which was founded in 1921, is the vanguard of the Chinese working class. It established the People's Republic of China in 1949 after years of armed struggle and currently has more than 60 million members in more than 3 million grassroots organizations. Marxism-Leninism and Mao Zedong Thought guide the CCP's actions in concert with Deng Xiaoping Theory. "Building socialism with Chinese characteristics" and "holding the high banner of Den Xiaoping theory" are central mottos of the CCP. ...read more.