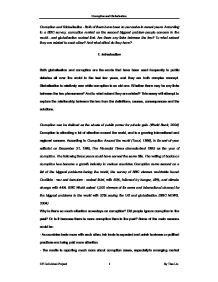 Corruption and Globalisation - Both of them have been so pervasive in recent years. According to a BBC survey, corruption ranked as the second biggest problem people concern in the worldand globalisation ranked first. Are there any links between the ...

Corruption and Globalisation - Both of them have been so pervasive in recent years. According to a BBC survey, corruption ranked as the second biggest problem people concern in the world...and globalisation ranked first. Are there any links between the two? To what extend they are related to each other? And what effect do they have? 1. Introduction Both globalisation and corruption are the words that have been used frequently in public debates all over the world in the last few years, and they are both complex concept. Globalisation is relatively new while corruption is an old one. Whether there may be any links between the two phenomena? And to what extend they are related? This essay will attempt to explore the relationship between the two from the definitions, causes, consequences and the solutions. Corruption can be defined as the abuse of public power for private gain. (World Bank, 2004) Corruption is attracting a lot of attention around the world, and is a growing international and regional concern. According to Corruption Around the world (Tanzi, 1998), in its end-of-year editorial on December 31, 1995, The Financial Times characterized 1995 as the year of corruption. The following three years could have earned the same title. The writing of books on corruption has become a growth industry in various countries. Corruption came second on a list of the biggest problems facing the world, the survey of BBC viewers worldwide found. Conflicts - war and terrorism - ranked third, with 50%, followed by hunger, 49%, and climate change with 44%. BBC World asked 1,500 viewers of its news and international channel for the biggest problems in the world with 52% saying the US and globalisation. (BBC NEWS, 2004) Why is there so much attention nowadays on corruption? Did people ignore corruption in the past? Or is it because there is more corruption than in the past? ...read more.

The other problem related to globalisation is poverty, the poor side of the world have yet to see much benefit from globalisation, some even argue that globalisation enlarge the gap between poor and rich. Especially the presence of multinationals can often increase the gap within the same country. Sometimes when global or local economic conditions change, an investment can disappear quickly. Therefore the development that comes with globalisation could be unsustainable. Finally, the presence of global brands and the sophisticated advertising used to sell them makes every place start to look the same, for example, people buy the same burgers and want to wear the same few brands of clothing. And because of the power of the multinational companies, local companies and brands of food, clothing, etc may find it hard to compete. Therefore certain culture or religious values may be undermined when the global influences become very strong. 2.4 Corruption and Globalisation What does corruption have to do with globalisation? Actually, they are closely related. While most people view corruption as harmful and have negative impact to societies and governments, some point out that there are possible benefits of corruption to globalization, for example, it can speed up the long and slow business procedures, the excluded can get access. Corruption has been so pervasive in recent years. While there are numerous negative effects between each other, is corruption ever a "good" thing to businesses? Some people suggest that corruption is the "grease" as the beneficial consequence of corruption. When thinking of the economic benefits of corruption, it can be argued that the economic benefits of corruption can even outweigh the costs and that corruption may not be harmful to growth and development, and sometimes it may even facilitate them. For some businesses, buying or selling political favors may provide political and economic advantages, therefore corruption and bribery reduce unnecessary business and political procedures as "greases the wheels", therefore the business efficiency improved and they actually speed up the wheels of commerce. ...read more.

Entry of foreign firms will increase competition, which along with reduction in government subsidies that are quite common in the developing countries has been found to decrease corruption. (Neelankavil, 2003) Neelankavil (2003) suggests some more specific steps that countries with high level of corruption should undertake: - Enact anti-corruption regulations - Setup monitoring systems - Penalties - Codes of conduct for government employees - Incentive systems for government employees - Better salary structure for government employees - establish democracy The key participants in the corruption process are the international companies, who try to use influence, gifts or bribes to get better deals from host nations. Neelankavil (2003) suggests that international companies should implement the following specifically: -internal code of conduct -employee training -adhere of rules -providing funding The above steps are not easy to implement, especially for developing countries, they require funds, training, even changes in attitude. However, they may be beneficial from globalisation, trading blocs, international organisations such as the World Bank, and IMF, even developed countries could be great help. By providing funds, training, monitoring systems and so on. 3. Conclusion International business corruption is a worldwide phenomenon that may not end in a very long time. On the other hand, its effects on economies are very damaging. Enormous efforts are being made to reduce corruption by some of the developed countries, i.e. international organisations such as the OECD, and Transparency International. They have succeeded to some extent in publicizing the problem. Even with these efforts, the number of cases of corruption has not abated; especially corruption in a small scale will continue to survive. There are more corruption cases reported each year. Globalisation is inevitable. We cannot deny that globalisation somehow increases corruption. However, corruption then reduces the benefits of globalisation itself. Therefore, the effort to reduce corruption must be continuous in the future. And the process of globalisation should be able to lead a "harmonization" of ethical and moral principles in business as well as in a better understanding of the problems with corruption. ...read more.