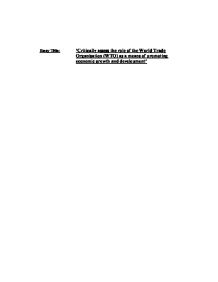 Essay Title: 'Critically assess the role of the World Trade Organisation (WTO) as a means of promoting economic growth and development' Introduction The World Trade Organisation (WTO) facilitates trade between its 148 member states. It has become a central institution for economic governance and is the framework for trade liberalisation.1 The WTO (based in Geneva) replaces the General Agreement on Tariffs and Trade (GATT) in this regard. GATT was established in 1947 in the aftermath of World War II, a time when the global economy was understandably unstable. The original objectives of GATT were to reduce tariffs and to facilitate global trade between states. The underlying principle was based on 'Most Favoured Nation' (MFN), a concept which assigned one country to another, and then gave that country beneficial trading rights. GATT endeavoured to grant every country an MFN status so that no one country would hold an advantageous position over another. 2 One key difference between the two bodies is that unlike GATT, the WTO is a permanent body but is not a specific unit of the United Nations. It came into being in 1995 as a result of the final round of the GATT negotiations called the Uruguay Round. The WTO has certain duties such as 'monitoring national trading policies, handling trade disputes, enforcing the GATT agreements, which are designed to reduce tariffs and other barriers to international trade...and to eliminate discriminatory treatments in international commerce'.3 The theoretical advantage if the WTO is that there will be a permanent body to oversee the liberalisation of free trade ensuring smooth negotiations between its members. ...read more.

To clarify, there are no official WTO definition of what exactly a developing country is, instead members must determine their own status. This is turn can be challenged by other member states who disagree upon the state in question.9 There are of course certain advantages to being seen as a developing country, as the label brings certain rights. As already mentioned above (footnote 7) developing states have longer transition periods before implementing agreements and they also receive technical assistance as highlighted earlier. The WTO provide several training courses for developing nations. One of these is the technological training assistance course, which has been previously mentioned. They do not hold courses for private groups or individuals only states a whole in order to promote fairness in their quest for endorse growth and development. Some of the courses on offer include; regular three month trade policy courses, a three week introduction to the WTO and two week specialised courses, one week dispute settlement courses, one day introduction courses for the WTO, WTO eTraining as well as courses as the Joint Vienna Institute. All the courses are available in three languages; English, French and Spanish and are integral to the education of nations with aim of encouraging growth and prosperity through the new learning initiatives.10 The WTO provides a case study of the Guatemalan economy dated January 2002. ...read more.

The WTO have several facilities in place, which endeavour to promote development. The rounds system such as Uruguay, Cancun and current Doha round also make a concise effort to remedy any obstacles, which stop this from happening. The G8 summit, an annual event is also an attempt to 'take all necessary decisions' to ensure the success of the WTO liberalisation process. One of the biggest facing developing countries is lack of infrastructure, poor economies and inefficient state institutions, which hamper the WTO's effort in promoting growth. A further obstacle is the massive anti-globalisation effort which is taking place by extremist groups who oppose capitalisation and globalisation. Extremists from both side oppose the liberalisation of trade, both communist as well as some high profile far right groups such as Le Pen's French National Front and Haider's Austrian Freedom Party. At present, although conscious efforts are being made by the WTO to promote growth and development (which to some extent has been achieved) little considerable progress has been made for all the reasons outlined above. That is not say that successful progress cannot be made in the future. The WTO are on the right road with their training schemes, as education is key but it is going to require a more consolidated effort, with increased FDI, improved infrastructure and an overhaul of any state institutions which are hampering efforts to date. With these changes in place it is quite possible that the WTO will be successful in their quest to promote economic growth and development. ...read more.