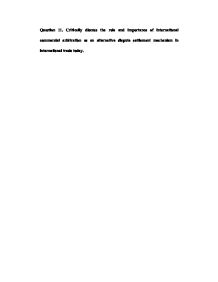 Critically discuss the role and importance of international commercial arbitration as an alternative dispute settlement mechanism in international trade today.

Question 11. Critically discuss the role and importance of international commercial arbitration as an alternative dispute settlement mechanism in international trade today. Introduction: In recent years, alternative dispute resolution, or ADR, has experienced an increasing popularity, no doubt as a result of dissatisfaction with the high costs and devastating effects of litigation. ADR includes such diverse procedures, such as non-binding mediation and the summary jury trial. But the most common form of ADR is arbitration. (WWW.BUSINESSWEEKONLINE.COM) Commercial arbitration has been going through an incredible growth over the past decades. (WWW.FINDLAW.COM) The development of international and domestic business operations in the last century relates to the increasing requirement of arbitration as a way of dispute settlement. Consequently, it has become a prominent feature of both domestic and international business transactions. As business globalizes, successful presentation or defense of international arbitration claims will become increasingly critical to company's litigation strategy. International arbitration is a good option if a party is not familiar with the court system of the country in which the dispute may be heard. Even if A party is successful in obtaining a judgment in a foreign country through litigation, there may be still be uncertainty about its enforcement. Arbitration awards, however, are generally enforced in most countries of the world. Most courts throughout the world also enforce arbitration agreements between companies doing business internationally. Trebilcock & Howse (2000), Page 51. On the other hand, certain disadvantages might have negative impact on the result for adopting arbitration. ...read more.

Not only can that have a prejudicial effect; it almost certainly will prolong the hearings. * Discovery In complex cases, discovery can be very important. Each side seeks to learn about the other party's case through the use of interrogatories, document demands and depositions. However, there is no such discovery is available in arbitration. (Mackie (1997), Page 65) In more complex cases, arbitrators typically allow some limited discovery, such as document exchange and perhaps one or two depositions. But there can be no assurance such discovery rights will be granted. Without such discovery, the parties enter the arbitration with very limited knowledge as to what can be expected. The advantage is that the very high costs, which are always incurred in discovery, may be avoided. * Costs Litigation costs in arbitration are substantially less than in court. Because arbitration is less formal than litigation, the hearing is less formal than litigation; the hearing is usually shorter than a court case would be. (Mackie (1997), Page 79) Also, an arbitration hearing can be scheduled much sooner than a court date. The saving in time can be reflected in lower overall costs to the parties. However, in some situation, arbitration can be very expensive. The parties compensate the arbitrators, and their fees can be very substantial, especially in a protracted case. In addition, the organisation administering the arbitration, such as the AAA, has a filing fee typically predicated on the amount in dispute, and that fee can be very substantial as well. ...read more.

(Mackie (1997), Page 231) Parties in litigation in the court system are entitled to select for a fee, legal counsel representation. In most cases litigation is a more formal method of dispute resolution. The court system is strictly governed by the rules of evidence and procedure under the laws. An unfavorable award of the court may be appealed to a higher court. (Mackie (1997), Page 240) Nonetheless, it is fair to say that arbitration may still in many instances be more cost-effective and predictable than litigating in a foreign country. Conclusion: In the event of a dispute arising, there are a variety of methods available for resolving it. The simplest and often the most beneficial is for the parties themselves to resolve the dispute by direct negotiation. Failing settlement, the parties may resort to litigation, a formal arbitration or one of a number of developing alternative forms of dispute resolution. In general, businesses tend to prefer to avoid litigation of possible. Litigation is slow and costly; moreover it may entail bad publicity and may damage the trading relationship between the parties to a dispute. The choice of arbitration permits parties not only to make the proceedings and the outcome more predictable, but also to assert control over release of information about the proceedings and over the continuing commercial relationships among the parties. Unlike court proceedings, in most countries, arbitration proceedings are confidential. Other advantages include less cost, less formality, time saving and enforceable awards. On the other hand, certain disadvantages exist in the arbitration procedure. Therefore, both the advantages and disadvantages must be fully appreciated, for the decision to elect arbitration and other court system is irreversible. ...read more.