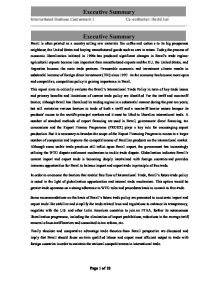 Brazil is often painted as a country selling raw materials like coffee and cotton s to its big prosperous neighbour, the United States and buying manufactured goods such as cars in return. Today, the process of economic liberalization initiated in 1990s has produced significant changes in Brazil's trade regime: agricultural exports became less important than manufactured exports and the EU, the United States, and Argentina become the main trade partners. Favourable economic and investment climate results in substantial increase of foreign direct investment (FDI) since 1997. As the economy has become more open and competitive, competition policy is gaining importance in Brazil. This report aims to critically evaluate the Brazil's International Trade Policy in term of key trade issues and primary benefits and limitations of current trade policy are identified. For the tariff and non-tariff barrier, although Brazil has liberalised its trading regime in a substantial manner during the past ten years, but still maintains various barriers to trade of both a tariff and a non-tariff barrier nature hamper its products' access to the world's principal markets and it must be lifted to liberalize international trade. A number of standard methods of export financing are used in Brazil, government direct financing, tax concessions and the Export Finance Programme (PROEX) plays a key role for encouraging export production. But it is necessary to broaden the scope of the Export Financing Program to access to a larger number of companies and improve the competitiveness of Brazilian products on the international market. Although some unfair trade practices still inflict upon Brazil export, the government has increasingly utilising the WTO dispute settlement mechanism to tackle trade dispute. Globalisation indicates Brazil's current import and export trade is becoming deeply intertwined with foreign countries and provides immense opportunities for Brazil to balance import and export trade in principle of free trade. In order to overcome the barriers that restrict free flow of International Trade, Brazil's future trade policy is noted in the light of globalization opportunities and internal trade mechanism. ...read more.

The policy of interest rate equalization in PROEX program makes great contributions to the export production and sales. In order to improve the competitiveness of Brazilian products on the international market, the major step was to broaden the scope of the Export Financing Program and make its operations accessible to a larger number of companies. Brazilian commercial banks, and subsidiaries of international banks are active in trade finance are active in trade finance. They can provide direct loans to exporter so that export can get bank financing of receivable. Now Brazilian commercial banks are becoming more aggressive in providing export financing for Brazilian firms, especially for small, medium or large Brazilian companies investing in capital goods, raw materials, infra-structure, energy or technology which substantially accelerate the export trade (National Import and Export Profile, 1999). 3.5 Foreign Trade Zones Foreign Trade Zones(FTZs) are areas in which domestic and imported merchandise can be stored, inspected, and manufactured free from formal customs procedures until the goods leave the zones (Daniels and Radebaugh, P.555). FTZs are important trading patterns in Brazil because increasing trade activities occurs under FTZ status. Brazilian government benefits substantially from using free zones more intensively, not only for the attraction of foreign investments but for inducing domestic firms to engage in export production. The role of free trade zones in Brazil is to provide a bureaucracy-free environment, free trade conditions such as duty free machinery, equipment and materials and stability for both local and foreign investors who want to process raw materials for export. Till now there are eight Free Trade Zones in Brazil. Manaus, which has been the most important free trade zone in Brazil, is extensively developed to create an industrial, commercial and agricultural center in Amazon (Trade Policy Review Body, 2000). The Free Trade Zone status implies that goods of foreign origin may enter into the Manaus free port without the payment of customs duties or other Federal, State or local import taxes. ...read more.