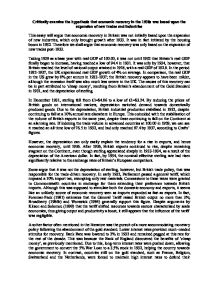 Critically examine the hypothesis that economic recovery in the 1930s was based upon the expansion of new trades and industries This essay will argue that economic recovery in Britain was not initially based upon the expansion of new industries, which only brought growth after 1933. It was in fact initiated by the housing boom in 1932. Therefore we shall argue that economic recovery was only based on the expansion of new trades post-1933. Taking 1929 as a base year with real GDP of 100.00, it was not until 1932 that Britain's real GDP finally began to increase, having reached a low of 94.4 in 1931. It was only by 1934, however, that Britain reached the level of national output attained in 1918, with a real GDP of 102.8. In the period 1932-1937, the UK experienced real GDP growth of 4% on average. In comparison, the real GDP in the US grew by 8% per annum in 1933-1937; the British recovery appears to have been milder, although the recession itself was also much less severe in the UK. The causes of this recovery can be in part attributed to 'cheap money', resulting from Britain's abandonment of the Gold Standard in 1931, and the depreciation of sterling. In December 1931, sterling fell from �1=$4.86 to a low of �1=$3.24. By reducing the prices of British goods on international markets, depreciation switched demand towards domestically produced goods. ...read more.

Due to this, long-term interest rates were pushed down, allowing the government to convert the 5% War Loan to a 3.5% stock in 1932, helping the country towards economic recovery. In contrast, countries still on the gold standard, such as France, Belgium, Switzerland and the Netherlands, were forced to maintain high interest rates to defend their reserves. The monetary policy pursued in Britain allowed it to expand its money supply much more quickly than the Continent until 1936, when the remaining members of the gold bloc finally abandoned the gold standard. This explains why Britain was able to recover quicker than the Continent between 1931 and 1934. Other countries which abandoned the gold standard in the early 1930s recovered from the depression in much the same way as Britain, supporting the theory that gold standard and monetary policy were key to economic recovery in the interwar period. Having established the importance of the depreciation of sterling and of monetary policy in the interwar period, we will now discuss in what ways these two facts lead to economic recovery. The two most prominent sectors which benefited from the growth stimulus of the favourable exchange and interest rates were the residential construction and consumer durables sectors. The increase in house building accounted for 17% of the increase in GDP between 1932 and 1934. In addition, it stimulated output and employment in other sectors through its backward linkages to firms producing bricks, tiles, pipes and other construction materials. ...read more.

Nonetheless, it is important to note that both the construction and manufacturing sectors helped recovery at different times. Building activity rose from November 1932, almost coinciding with the beginnings of the economy-wide upturn. Between 1932-1934 expenditure on the construction of dwellings rose by almost 50%, and housing went from accounting for 3% of GDP in 1932 to accounting for a 17% rise in GDP in 1934. Thus, it was the housing boom which began the recovery. However, after mid 1933, investment in manufacturing and transport really took off, growing at an average of 14% through 1937. New industries making producer durables were providing one third of all new jobs by 1937. Hence, it can be said that new industries helped keep the recovery going, but were not responsible for starting it. Although the British economic recovery was fuelled by new trades and industries after 1933, it was not started by these. It was in fact, started by the housing boom. The hypothesis that recovery was based upon the expansion of these new industries is therefore incorrect. Recovery was based on the devaluation of the sterling after Britain left the gold standard, and the monetary policies which proceeded this. Both the monetary policy and the devaluation lead to the housing boom which started the recovery, and left conditions favourable domestically for new industries to increase their output and thus continue to lead Britain to economic recovery. ...read more.