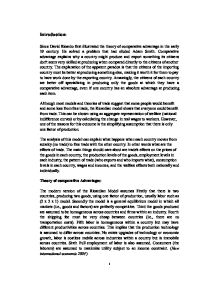 Introduction: Since David Ricardo first illustrated the theory of comparative advantage in the early 19 century. He solved a problem that had eluded Adam Smith. Comparative advantage explains why a country might produce and export something its citizens don't seem very skilled at producing when compared directly to the citizens of another country. The explanation of the apparent paradox is that the citizens of the importing country must be better at producing something else, making it worth it for them to pay to have work done by the exporting country. Amazingly, the citizens of each country are better off specializing in producing only the goods at which they have a comparative advantage, even if one country has an absolute advantage at producing each item. Although most models and theories of trade suggest that some people would benefit and some lose from free trade, the Ricardian model shows that everyone could benefit from trade. This can be shown using an aggregate representation of welfare (national indifference curves) or by calculating the change in real wages to workers. However, one of the reasons for this outcome is the simplifying assumption that there is only one factor of production. The analysis of this model can explain what happens when each country moves from autarky (no trade) ...read more.

The logic behind absolute advantage is quite intuitive. This confusion between these two concepts leads many people to think that they understand comparative advantage when in fact, what they understand, is absolute advantage. To recognize this 2 different theory can use below table 4 Tab 4: Trade to Kenya (1000 US$) Export to EU Import from EU Wearing apparel and leather products 15,027 5350 Food products 783,658 120,997 Textiles machinery 11,805 64,402 Footwear 273 2363 Non-metallic mineral products 11,088 14,096 Transport equipment 4,067 94,096 Plastic products 30 29,027 Beverages 118 5,278 Furniture 268 3,326 Wood products 2,146 908 Chemicals 11,024 173,129 Sources: (M.V.Charles/international trade and world economy, Chapter 3) From the table, both imports and exports can be seen. The EU has considerably higher productivity than Kenya. Based on the theory of absolute advantages, the EU should only be exporting to Kenya, and not import anything at all. However, as is evident from the table, the EU does import goods from Kenya, which could be based on trade in accordance with comparative. (C.V. Marrewijk). The table above fully evident that the theory of comparative advantage does better in terms of explanatory power than the theory of absolute advantage. The benefit after trade also can be seen at worker's wage. ...read more.

Therefore, to dismiss the results of economic analysis on the basis of unrealistic assumptions means that one must dismiss all insights contained within the entire economics discipline. Surely, this is not practical or realistic. Economic models in general and the Ricardian model in particular do contain insights that most likely carry over to the more complex real world. Interpreting the Theory of Comparative Advantage: The usual way of stating the Ricardian model results is to say that countries will specialize in their comparative advantage good and trade them to the other country such that everyone in both countries benefit. Stated this way it is easy to imagine that it would not hold true in the complex real world. A better way to state the results is as follows. The Ricardian model shows that if any country want to maximize total output in the world then, first, fully employ all resources worldwide; second, allocate those resources within countries to each country's comparative advantage industries; and third, allow the countries to trade freely thereafter. In this way might raise the well being of all individuals despite differences in relative productivities. In this description, do not predict that a result will carry over to the complex real world. Instead to carry the logic of comparative advantage to the real world and have to look to achieve a certain result (maximum output and benefits).. ?? ?? ?? ?? 1 ...read more.