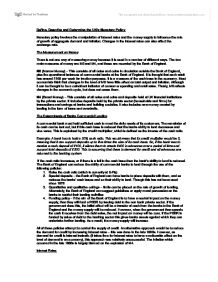 Define, Describe and Determine the UK's Monetary Policy Monetary policy involves the manipulation of interest rates and the money supply to influence the rate of growth of aggregate demand and inflation. Changes in the interest rates can also affect the exchange rate. The Measurement on Money There is not one way of measuring money because it is used in a number of different ways. The two main measures of money are M0 and M4, and these are recorded by the Bank of England. M0 (Narrow Money) - This consists of all notes and coins in circulation outside the Bank of England, plus the operational balances of commercial banks at the Bank of England. It is thought that each adult has around �100 per week for traction purposes. It is a measure of the cash base in the economy. Most economists think that changes in the level of M0 have little effect on total output and inflation. ...read more.

So, if the bank was to receive a cash deposit of �100, it allows them to create �400 in advances over a period of time and support total deposits of �500. This is assuming that there is demand for credit and all advances are returned to the banking system. If the cash ratio increases, or if there is a fall in the cash base then the bank's ability to lend is reduced. The Bank of England can reduce the ability of commercial banks to lend through the use of the following policies: 1. Raise the cash ratio (which is currently at 0.4%) 2. Special deposits - the Bank of England can force banks to place deposits with them, and so reduces the banks' cash bases and so their ability to lend. Though this has not been used since 1979 3. Quantitative and qualitative ceilings - limits can be placed on the rate of growth of lending. ...read more.