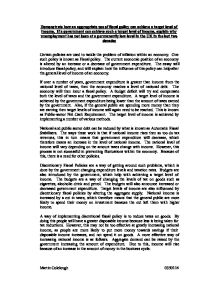 Demonstrate how an appropriate use of fiscal policy can achieve a target level of income. If a government can achieve such a target level of income, explain why unemployment has not been at a permanently low level in the UK in the last two decades Certain policies are used to tackle the problem of inflation within an economy. One such policy is known as Fiscal policy. The current economic position of an economy is altered by an increase or a decrease of government expenditure. The essay will introduce fiscal policy, and will explain how the influence of this policy can help alter the general level of income of an economy. If over a number of years, government expenditure is greater than income from the national level of taxes, then the economy reaches a level of national debt. The economy will then incur a fiscal policy. ...read more.

Because of this, there is a need for other policies. Discretionary Fiscal Policies are a way of getting around such problems, which is done by the government changing expenditure levels and taxation rates. Budgets are also introduced by the government, which help with achieving a target level of income. The budgets are a way of changing the levels of tax on goods such as cigarettes, alcoholic drink and petrol. The budgets will also announce increased or decreased government expenditure. Target levels of income are also influenced by discretionary fiscal policies by altering the aggregate supply. National income is increased by a cut in taxes, which therefore means that the general public are more likely to spend their money on investment because the cut left them with higher income. A way of implementing discretional fiscal policy is to reduce taxes on goods. ...read more.

Despite a drop in unemployment levels, inflation was on the rise. Unemployment was not helped by the joining of the European exchange rate mechanism by the Conservative party. Inflation and interest rates fell within 12 months. The UK left the European exchange rate mechanism in 1992. When Labour took power of government in 1997 they nearly abolished all Fiscal policies. Automatic fiscal stabilisers did still exist allowing a rise in deficits during a recession, and a fall during a boom within the economy. Monetary policies have been used by the government over the last two decades to hopefully achieve its' targets. Fiscal policies were scrapped, which seems to have led to a drop in unemployment rates. It is hard for the government to predict the outcomes of it's' actions, and will not therefore know what the policies will lead to. Due to this, the level of unemployment will not stay at one stage and will rise and fall depending on government's approaches to interest rates and inflation. Martin Colclough 0350114 ...read more.