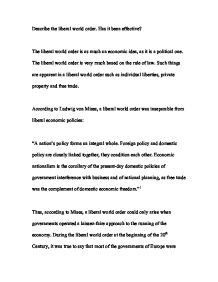 Describe the liberal world order. Has it beeneffective?

The second economic constraint set out by Mises was that there should be a market economy, whereby the forces in the market should be left to work freely, that supply and demand should be left to determine price rather than the government regulating this. Thirdly, free trade is seen as an essential aspect of a liberal world order, he stated that it must be free to import and export between countries, with out control by governments. Finally, there must be a free market monetary system in place, in that the government must not control either the value or the flow of money in the economy Mises also argued that, if a country's domestic economic activity was to be fully privatised, this would mean that the economic activity in that country would effectively be free from political influences, as it would not be the government controlling it. He argued that the way to attain peace and prosperity was not by governing and controlling, but rather by limiting the level of governance, and that society would naturally sort itself out. This idea was also agreed by Ricardo: "Under a system of perfectly free commerce, each country naturally devotes its capital and labour to such employments as are most beneficial to each. The pursuit of individual advantage is admirably connected with the universal good of the whole. By stimulating industry, by rewarding ingenuity, and by using most efficaciously the peculiar powers bestowed by nature, it distributes labour most effectively and most economically: while, by increasing the general mass of productions, it diffuses general benefit and binds together, by one common tie of interest and intercourse, the universal society of nations throughout the civilised world." In order for the liberal world order to come about; first one nation must hold the responsibility of setting up the liberal world order and also for maintaining it. The United States has been responsible for creating a large amount of the liberal world economy, after the Second World War, the United States recognised that it was the leading power in the world. ...read more.

The United States has been responsible for creating a large amount of the liberal world economy, after the Second World War, the United States recognised that it was the leading power in the world. It set up various institutions in order to regulate the liberal world economy; the International Monetary Fund and the World Bank were set up to help nations who needed help, rather than borrowing from other countries directly. The United States also set up the General agreement of Tariffs and Trade Unfortunately, it can be said that the liberal world order has not experienced a great deal of success. It requires a dominant power to act completely altruistically in setting up such an economic platform, without looking for an individual gain, rather, looking to benefit all members of the order. It is necessary to have one dominant power to look over the order as in the absence of such power, a completely open world economy with free trade throughout would prove too difficult to maintain. If this were the case, states would again look to benefit themselves alone, and would become self-interested and protectionist. This is because in the short term states may feel that they would benefit more if they were to look out simply for their own well-being and would again adopt their protectionist stances, destroying the liberal world order. This problem can be explained with simple economics, a liberal international order is in essence a public good, in that if created, would be available to all, and thus all would be able to benefit from it. For that reason, no nation is willing to bear the cost of such an effort if everyone will be able to benefit. It would be more beneficial for that nation if they waited for another nation to set it up, and then simply jump onto the bandwagon at no cost. As a result it can be said that the success of the Liberal World Order has been limited due to the difficulty of its implementation. At present, World Politics can still be said to be predominantly realist based in its definition. ...read more.