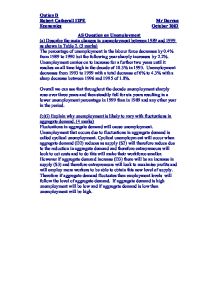 Describe the main changes in unemployment between 1989 and 1999 as shown in Table 2.