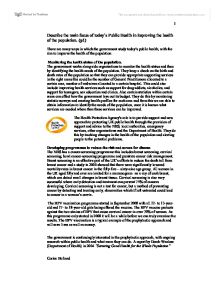 Describe the main focus of todays Public Health in improving the health of the population. (p1)

Describe the main focus of today's Public Health in improving the health of the population. (p1) There are many ways in which the government study today's public health, with the aim to improve the health of the population Monitoring the health status of the population. The government works along side organisations to monitor the health status and then by identifying the health needs of the population. They keep a check on the birth and death rates of the population so that they can provide appropriate supporting services in the right areas this could be the number of General Practitioners allocated to a certain area, number of midwives allocated to a certain hospital. This could also include improving health services such as support for drug addicts, alcoholics, and support for teenagers, s*x education and clinics. Also certain statistics within certain areas can effect how the government lays out its budget. They do this by monitoring statistic surveys and creating health profiles for each area and from this we are able to obtain information to identify the needs of the population, once it is known what services are needed where then these services can be improved. The Health Protection Agency's role is to provide support and new approach to protecting UK public health through the provision of support and advice to the NHS, local authorities, emergency services, other organisations and the Department of Health. ...read more.

You can find information about communicable diseases and contact them via their website http://www.dh.gov.uk/en/Publichealth/Communicablediseases/.htm The NHS has an immunisation schedule, which can be found on leaflets, websites and through care providers such as midwives, health visitors and nurses that gives out clear information on vaccines- * When and why? - Which vaccinations are given when and why they are given at certain ages? * The risks- Weighing up relative risks of immunisation. * Safety- How vaccines are tested and monitored * Science- How the vaccines work. The immunisation starts at two months old as newborn babies have some immunity to disease passed on to them through the mother. And certain vaccinations will be topped up every few years. For example diphtheria, tetanus and polio are given at two months, three months, four months, three years four months and between the ages of Thirteen years and eighteen years. Other vaccinations include whooping cough, given at two months, Haemophilias influenza (HIB) given at two months, three months, four months and twelve months and the Measles, Mumps and rubella MMR given at thirteen months and three years four months. Seasonal flu vaccine is also offered to all those aged sixty-five years and over, people with certain long-term medical conditions, health and social care workers and those who work in close contact with poultry. There has been a lot of controversy over the MMR combined vaccination widely acknowledged by the media, that it might be linked to an increased risk of autism. ...read more.

Obesity can lead to coronary heart disease and diabetes and people becoming overweight and obese are increasing. The percentage of adults who are obese has roughly doubled since the mid-1980. If we are able to educate young families and children hopefully the statistics will come down in the future. Planning and evaluating the provision of relevant health services The governments are continuingly assessing the provision of relevant health services and whether or not they are having sufficient impact on specific problems. (APHO) The Association of Public Health Observatories represents 12 different public health observatories to produce information, data and to monitor the health of the population. APHO help the NHS and other governmental organisations to ensure that decisions and actions taken to improve health are supported by sound data and information. In 2008 ERPHO (Eastern Public Health Observatory) conducted a lifestyle survey 26,290 people aged 16+ were interviewed. Questions were asked about Age, s*x, Ethnicity, General health and long term limiting illness/disability Smoking status, Smoking quit attempts, Alcohol consumption, height and weight, Physical activity and Diet. They found that there was a major difference in smoking in deprived areas compared with the rest of the East of England with 8.7% more males smoking and 6.9% more females smoking, and over 70% of smokers within the East of England had made no attempt to quit. These results could show that the East of England especially deprived areas need more support/ clinics/ services in giving up smoking. ...read more.