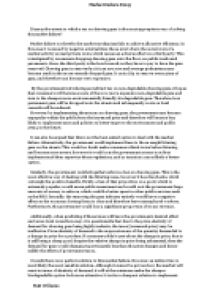 Discuss the extent to which a tax on chewing gum is the most appropriate way of solving the market failure involved?

﻿Market Failure Essay Discuss the extent to which a tax on chewing gum is the most appropriate way of solving this market failure? Market failure is whereby the market mechanism fails to achieve allocative efficiency. In this case it is caused by negative externalities; these exist where the social costs of a market activity exceed private costs, which causes an adverse effect on a third party. This is instigated by consumers dropping chewing gum onto the floor, on public roads and pavements. Here, the third party is the local council, as they have to pay to have the gum removed. Chewing gum is removed as it is an eye sore and average pedestrians may become stuck in the more recently dropped gum. ...read more.

It can also be argued that this is not the best-suited option to deal with the market failure. Alternatively, the government could implement fines to those caught littering gum on the streets. This would no doubt make consumers think-twice before littering and become more aware, however it would cost the government money to at first implement and then supervise these regulations, and so taxation is most likely a better option. Similarly, the government could altogether enforce a ban on chewing gum. This is the most effective way of dealing with the littering issue, however it has drawbacks, which outweigh the positive benefits. Firstly, a ban of that proportion on a good, which is extremely popular, would cause public resentment and would cost the government huge amounts of money to enforce, which could be better spent in other public services such as the NHS. ...read more.

may be ineffective. Price elasticity of demand is the responsiveness of the quantity demanded to a change in price for a product. If consumers didn?t care about the change in price, due to it still being a cheap good, despite the relative change in price being substantial, then the demand for gum would change proportionately less than the price changes and hence nullify the effects of government taxes. Overall, there is no perfect solution to this market failure. However, an indirect tax is most likely the most sensible solution. Although it cannot be proven how the market will react in terms of elasticity of demand, it will at the minimum make the cheaper biodegradable option look more attractive. It is also a cheapest solution to implement. Matt Williams ...read more.