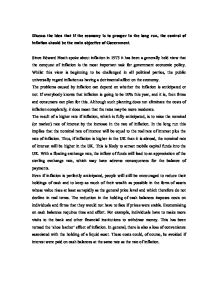 Discuss the idea that if the economyis to prosper in the long run, the control of inflation should be the mainobjective of Government

Discuss the idea that if the economy is to prosper in the long run, the control of inflation should be the main objective of Government. Since Edward Heath spoke about inflation in 1973 it has been a generally held view that the conquest of inflation is the most important task for government economic policy. Whilst this view is beginning to be challenged in all political parties, the public universally regard inflation as having a detrimental affect on the economy. The problems caused by inflation can depend on whether the inflation is anticipated or not. If everybody knows that inflation is going to be 10% this year, and it is, then firms and consumers can plan for this. Although such planning does not eliminate the costs of inflation completely, it does mean that the rates may be more moderate. The result of a higher rate if inflation, which is fully anticipated, is to raise the nominal (or market) rate of interest by the increase in the rate of inflation. In the long run this implies that the nominal rate of interest will be equal to the real rate of interest plus the rate of inflation. Thus, if inflation is higher in the UK than it is abroad, the nominal rate of interest will be higher in the UK. This is likely to attract mobile capital funds into the UK. With a floating exchange rate, the inflow of funds will lead to an appreciation of the sterling exchange rate, which may have adverse consequences for the balance of payments. ...read more.

Typically, the amount of income tax we pay depends on our nominal (money) incomes, and the amount of capital gains depends on the increase in the nominal value of our assets. As a result of this type of tax system the tax to pay increases simply as a result of inflation, with no change in the structure of neither tax rates nor our real pre-tax income. The effect of this is most significant on the lower income groups. If we consider the effect of inflation halving the value of money, and so what previously could have been bought with �4000 pounds now needs �8000 pounds, then it is clear that someone earning �4000 a year before inflation will have no tax, however after inflation they earn �8000, but the purchasing power of their income has remained unchanged, meaning that they are now taxed �1000, 25% of their income without earning anymore or the tax structure changing. Probably the most common danger associated with rising inflation is that it turns into hyperinflation. During times of hyperinflation money loses its value so quickly that no one wishes to keep it for a moment longer than necessary and there may be such a flight from money that the velocity of circulation approaches infinity. If this occurs, exchange of goods will no longer be carried on with money but will be made on a purely barter basis. The economy would thus lose the advantages of monetary exchange and therefore operate less efficiently. It is possible to identify a number of costs that might be incurred by society as a result of the inflationary process. ...read more.

What is more, the exploitation of complementarities would address the apparent trade-off between unemployment and inequality by giving the unemployed greater incentives to work. Unemployment policies are also characterized by political complementarities, when the ability to gain political consent for one policy depends on the implementation of other policies. For example, the political feasibility of unemployment benefit reform - such as reducing the magnitude and duration of benefits - depends on tax reform - such as reducing payroll and income taxes - and employment promotion policies - such as hiring subsidies. The reason is that 'single-handed reforms' - such as reducing unemployment benefits without changing any other policy instrument - may improve economic efficiency, but they often pit the interests of the employed against those of the unemployed, creating political deadlock. In contrast, 'broad (many-handed) reforms' enable the government to use the efficiency gains from one reform to compensate the losers from another reform - and vice versa - thereby breaking the political deadlock. Complementary policies call for a distinctive approach to policy-making. When only a small number of unemployment policies are under consideration, it may be politically impossible to implement them and their impact on unemployment would be small. It is only when a broader range of policies are implemented simultaneously that they become politically feasible and economically effective. In conclusion, there are long-term policies, which the government tends to favour, to increase the productive potential of our economy and attempt to reach that potential, however, due to the many inconveniences and obstacles to the effective implementation of these policies, they rarely are as successful as they hope to be. ...read more.